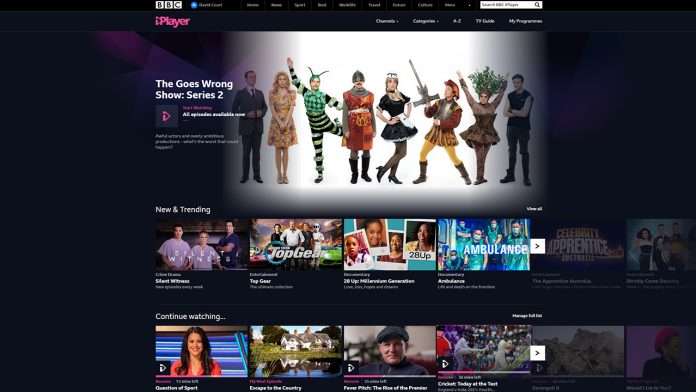 If (like me) you’re an ex-pat living in NZ, you probably miss watching BBC iPlayer. Well, don’t worry. In this article, I’m going to show you the best way to seamlessly watch iPlayer, just as if you were back in Blighty. Here’s how to watch BBC iPlayer in New Zealand.

How to watch BBC iPlayer in NZ

The best way, to watch BBC iPlayer in New Zealand is use a VPN to spoof your IP address (to a UK one). Below, I’ll take you through what you need to look for when buying a VPN and some common mistakes to avoid.

Get a VPN that works with BBC iPlayer

If you want to watch BBC iPlayer from New Zealand, you’re going to need to find a way to spoof your internet connection to make it appear (to the BBC iPlayer website) like you’re actually connecting from inside the UK. The best, and easiest, way to do this is to use a VPN.

I recommend using ExpressVPN ($6.67/month) for the best connection speeds and reliability

Note: Not all VPNs work with BBC iPlayer. This is because iPlayer has started blocking some services for abnormal usage reasons. Take a look at our BBC iPlayer detecting VPN article to find out more.

The next step is straightforward. You need to download and install the VPN software on to your device.

Once you’ve installed the VPN onto your device, you’ll need to login with the same details you signed up with.

Connect to a server in the UK

Now the VPN is installed on your device, the next thing you need to do open the app and connect to a server in the UK.

That’s it. All you need to do now is go to www.bbc.co.uk/iplayer – or open the BBC iPlayer app – and watch BBC iPlayer (from New Zealand).

You’ll need to have a BBC account to do this, but these are free and only take a few minutes to set up.

IP addresses: What you NEED to know

Your IP address is a lot like your physical address or landline telephone number. Even though you probably have no idea what your current IP address is – websites can use it to work out where you’re connecting to the internet from as your IP address is given to you from your local ISP.

Why don’t all VPNs work?

Until recently, you could buy any old VPN and use it to connect to any server in the UK then start streaming BBC iPlayer immediately.

But since late in 2017, the BBC started to actively blacklist VPNs from using iPlayer. And the reason for this was fair enough. People from any country in the world could pay a VPN provider a couple dollars a month and gain unlimited access to BBC iPlayer. Hardly fair on the licence payers back home.

The BBC continues to blacklist and block VPNs to this day.

When you take a closer look at how the BBC blacklists VPNs you start to understand how you can work around the ban.

The way the Beeb blacklists a VPN is pretty simple. It now actively looks and blocks IP addresses that stream/download abnormal amounts of content from BBC iPlayer.

This is a problem for VPNs as they share a relatively small number of servers (and IP addresses) with thousands of customers.

At present, VPN servers are getting blacklisted (by the BBC) faster than they can create new servers. The end result is users of VPNs being unable to access BBC iPlayer on an increasingly regular basis. Any of you who have been using a VPN to watch BBC iPlayer will have experienced this (since late 2017).

The best way to combat this new strategy from the BBC is to buy a VPN that replaces its IP addresses as soon as they’re blacklisted.

I’ve been using ExpressVPN ($6.67/month) since April 2018 and have enjoyed access to BBC iPlayer, BT Sport, 4oD ITV Player and US Netflix with no buffering issues or other interruptions.

There are tons of VPNs that will *temporarily* unblock BBC iPlayer. When I first moved to New Zealand I thought I did my research properly and decided IPVanish was the best VPN for me in terms of price and functions.

And for the first few days, IPVanish unblocked BBC iPlayer for me reasonably well. Then, all of a sudden, it didn’t. I reached out to IPVanish’s support team and was told that it no longer supported unblocking BBC iPlayer as one of its features.

Below are five VPNs that have been able to beat BBC iPlayer’s VPN ban for the past several years.

Note: Take a look at our Which VPNs still work with BBC iPlayer article to find out more.

Read next: How to listen to BBC Radio abroad.