ReviewsFire
Home NZ ExpressVPN review: The best VPN at being a VPN! 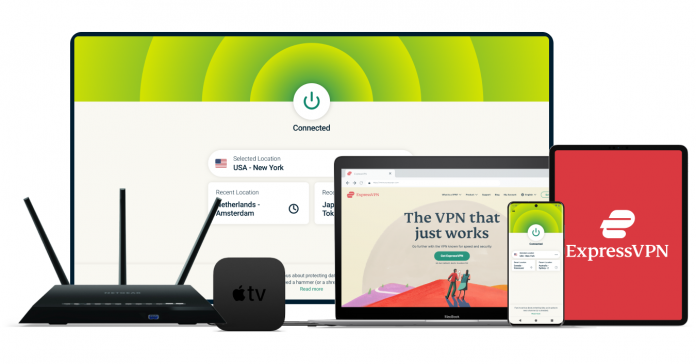 Here’s a tongue twister for you, ExpressVPN is the best VPN at being a VPN. What I mean is, ExpressVPN focuses solely on being the best VPN it can possibly be. There’s no bloatware here and a subscription doesn’t come with any subpar additional features or add-ons; it’s a VPN for someone who wants a VPN and it’s very good at what it does.

While it’s on the more expensive side, what you’re getting makes it worth the higher price. With servers available in 94 countries, with less than 3% of those being virtual servers, ExpressVPN has a physical network that’s incredibly fast, and reliable. ExpressVPN has taken the time to build a network all over the world with physical servers. This allows it to quickly fix any errors, bugs or problems itself, instead of relying on third-party renters.

It’s available on almost any device you can think of it boasts super-fast speeds, thanks in part to its Lightway protocol, and is incredibly secure. We found no DNS Leaks in our tests and independent audits confirmed ExpressVPN doesn’t show any weaknesses in its security.

It works in countries where VPNs are banned, we had no issues watching geo-blocked content on streaming services and it has a 24/7 chat support team in case you come across any issues.

ExpressVPN works consistently with everything. If you want a secure, anonymous internet connection it can do that, it’ll also allow you to watch any streaming service anywhere in the world. It’s one of the best VPNs on the market and is definitely worth the extra investment if you want a VPN that just works.

There’s a lot to think about when considering the price of a VPN. The value can be altered by several factors, most notably the length of the subscription, how many devices are covered, how many servers the VPN has and any additional features it offers.

Our findings suggest the 20 best VPNs cost, on average, $4.33/month for a 24-month subscription. This puts ExpressVPN on the more expensive end of the scale. However, our findings also show that the average cost for a single-month VPN subscription is $12.06, which means ExpressVPN is well-priced in this regard.

An ExpressVPN subscription allows you to connect to 5 devices simultaneously. For VPNs with a limit on simultaneous devices, this is just below average, which our research shows is seven devices. Some VPNs like Surfshark, Windscribe and IPVanish offer unlimited device connections.

I will add that ExpressVPN is one of the easiest VPNs to install on a router. This will allow you to use an unlimited number of devices with the VPN, so long as they’re in the same household or on the same WiFi network. Here’s our guide on how to put a VPN on a router.

You can use ExpressVPN in multiple households. We tested the same account in two different locations and didn’t run into any problems.

It also has an easy-to-use app that gives you quick access to settings and servers. The app is available on several different devices:

You can also easily install ExpressVPN firmware on a vast selection of routers.

How secure is ExpressVPN?

A DNS is a database of internet addresses categorised by domain names. It recognises a domain name, like ReviewsFire.com and maps that name to the website’s IP address. A DNS is responsible for translating a domain name into its long, complex code and vice versa.

If you search for a website like ReviewsFire.com, your device sends a query to a DNS server where it asks for the unique IP address of that site. Only once that DNS server has provided you with the IP address can you access the website.

When you connect to a VPN, your online traffic is routed through the VPNs network. This includes the DNS queries explained above. If your VPN is secure, these DNS requests will go through your VPNs encryption processes and go straight to your VPN DNS servers.

If the test shows your DNS queries are going to the servers provided by your local internet service provider (ISP), then the VPN has a DNS leak. This means it’s not fully encrypting your data, and third parties might be able to intercept it.

If a VPN service doesn’t reroute and encrypt your online traffic entirely, it’s not as secure as it should be.

We came across no issues when using ExpressVPNs own DNS Leak testing software. We also tested it using third-party software – DNSleaktest.com – where we also didn’t encounter any DNS leaks.

The tests showed that ExpressVPN is a secure VPN that fully encrypts your data. This means you can surf the web entirely anonymously with ExpressVPN.

Cure53 tested ExpressVPN’s Linux and macOS desktop apps via penetration tests and source code audits and found no significant weaknesses. You can find the full macOS audit here. And the Linux audit here.

F-Secure reviewed the Windows app and also found no significant weaknesses. You can find the full audit here.

These results show that ExpressVPN provides a strong level of security that ensures users wil have their online privacy protected.

To measure the speed of ExpressVPN, we connected to multiple servers and initiated download and upload speed tests. Of course, this is often affected by numerous factors, such as the speed of your internet connection. To accommodate this, we measured the speeds against our speed test results with a VPN turned off:

These are very good results. The upload speeds decrease significantly in all three test countries, but the download speeds are still breakneck speeds with ExpressVPN turned on.

A VPN protocol is a set of rules determining how a VPN reroutes your online data through its servers. Some protocols are faster than others but are less secure, and some are slower but are more secure.

ExpressVPN supports two protocols, OpenVPN and Lightway. Each has a UDP and a TCP option as well. For more information on VPN protocols, and why they’re important, take a look at this excellent explainer from CyberNews.

Lightway is the standout here. It’s ExpressVPN’s own VPN protocol. It’s lightweight with only 2,000 lines of code, and very fast.

Using Lightway, server connection times are exceedingly quick. From New Zealand, we tested connecting to a US, UK, and Vietnamese server. It never took more than 1.5 seconds. Connecting to a US server was the quickest at less than a second, the UK server took the longest at 1.4 seconds, and the Vietnam server only took 1 second. It’s impressive when you consider the geographic distance between New Zealand and those countries.

Lightway is also an open-source protocol and is available for anyone to have a look at. This ensures transparency so customers can see how secure it is. It’s nice to know the intricacies of the VPN aren’t hidden from its users.

One of the best features of Lightway is Always-on Protection. If you’re changing WiFi, maybe going from WiFi to data, or if your signal drops out, the ExpressVPN connection doesn’t terminate. It becomes idle. This means you’ll maintain the same connection to the same ExpressVPN server, and it will pick up as soon as you get back online. It’s a nice added bit of security.

The data can be hard to find when assessing the total number of servers a VPN has. A lot of VPNs don’t disclose how many servers they support. It’s also not a very good way to measure the capabilities of a VPN, as the VPN might have hundreds or even thousands of servers all in the same location.

The best way to assess a VPN and its offerings is by looking at how many countries the VPN supports.

ExpressVPN is one of the best VPNs in this regard, with servers based in 94 countries around the world. This is well above the 71-country average and is second only to HMA’s massive 218 supported countries.

There are two types of VPN servers, physical and virtual. Physical servers are straightforward. They’re physical hardware that is setup in a particular country. With these servers the registered IP address you’re given and the server providing it are physically located in the same country. They’re generally more reliable than virtual servers as they are more powerful and they can be customised.

Virtual servers act like physical servers but they don’t have hardware solely dedicated to that server alone. They’re configured on existing hardware which is shared with other servers and the space is often rented.

Virtual servers are generally slower than physical servers as they’re sharing resources with other servers and because they’re rented, it can be hard to fix errors or issues. What they are very good at is allowing VPNs to provide IP addresses in countries where it’s not possible to build or install a physical server.

ExpressVPN uses both types. While physical servers are the gold standard, virtual servers provide unique opportunities to supply IP addresses for countries where VPNs are illegal.

For example, ExpressVPN’s “Indian” servers are actually based in the UK or Singapore. The IP address will match the country you’ve selected, India, but the server is in a country where VPNs are legal. This will allow you to reliably get an Indian IP address without governmental interference.

We did a speedtest of ExpressVPNs virtual server for India, physically based in the UK and found it still maintained very good speeds:

Less than 3% of ExpressVPN’s servers are virtual servers, the rest are physically installed, managed and customised by ExpressVPN. This means if there’s any issues with the servers, ExpressVPN has the ability to go in and fix it itself. It all makes for a very reliable VPN that constantly updates its hardware to ensure reliable connections.

Because of copyright and licensing agreements, streaming services try to block VPNs from connecting to their platforms. These blocks can be complex for VPNs to get around, and often VPNs won’t work with the leading streaming services.

To test this, we tried connecting to four streaming services with ExpressVPN over a month to see if we encountered any issues. We chose Netflix, BBC iPlayer, Hulu and HBO Max.

Over the month, we had no issues connecting to all four streaming services with ExpressVPN. We didn’t notice any slowdowns or stuttering, and we didn’t encounter any errors that would suggest ExpressVPN can no longer get around the blocking methods.

With that said, these services are notoriously adept at blocking VPNs, and ExpressVPN working flawlessly was a good sign.

With an ExpressVPN subscription, you’re just getting a VPN.

There are no extra add-ons provided.