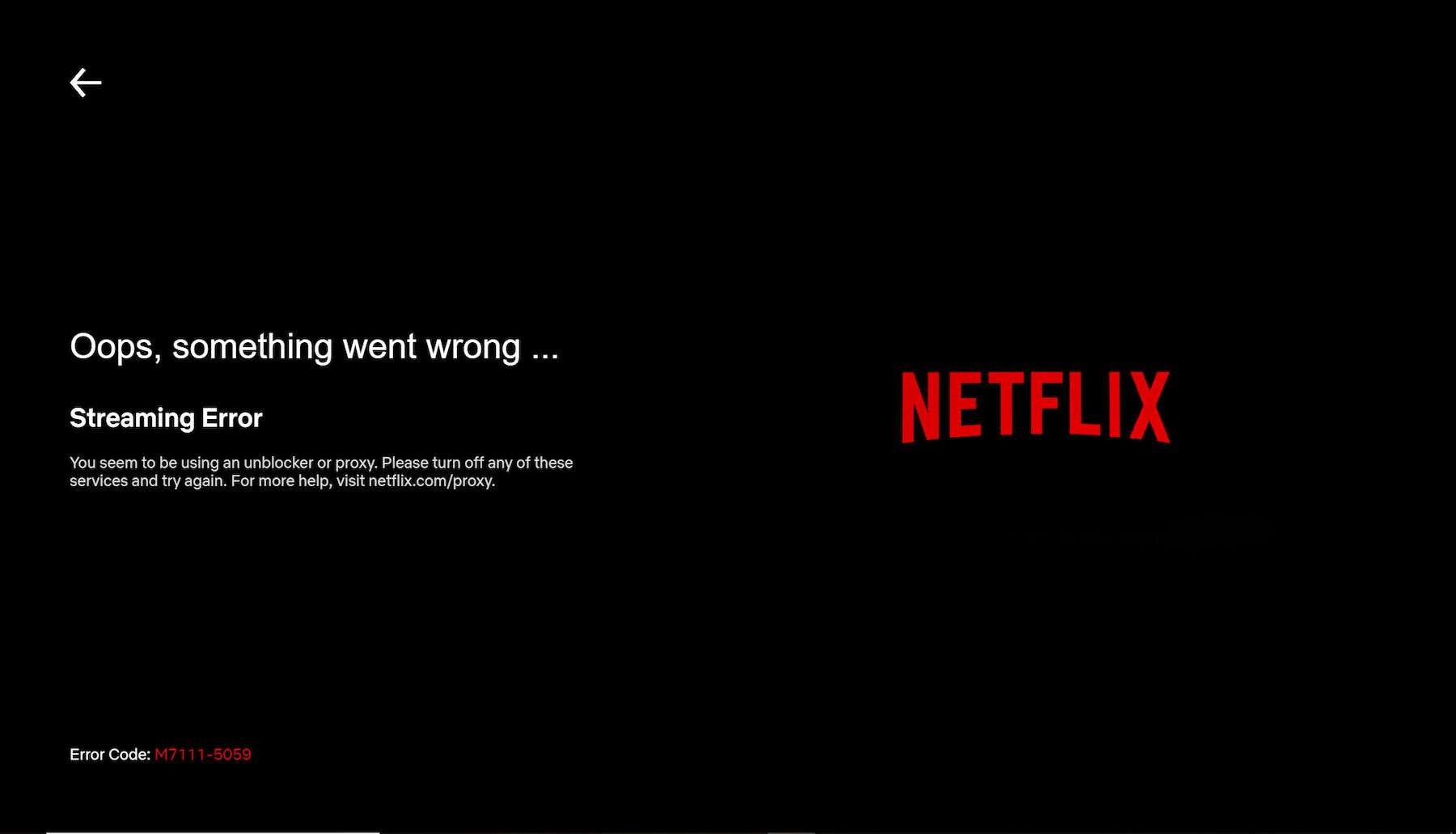 The easiest way to stop the m7111-5059 error code appearing is to turn off your VPN or Proxy. This, however, will result in Netflix serving you your local library. If the show(s) you want to watch isn’t in your local library – see how to watch The Office US on UK Netflix for example – then “fix” probably isn’t the end-result you’re looking for.

If you need to use a VPN or Proxy to access another country’s Netflix library, you’re going to need to switch to a VPN provider that Netflix doesn’t block.

See also: BBC iPlayer not working with VPN? Here’s how to FIX that!

Netflix explains that its m7111-5059 error code is served when “our systems have detected that you are connecting via a VPN, proxy, or “unblocker” service. Because our content library can vary by region and and these services hide your region, you may not be able to stream some movies and TV shows when connected in this way.

Turning your VPN off is the obvious way to fix this. But the knock-on effect means you’ll only have access to your local Netflix library.

If you want a fix that lets you access the US, UK or Canadian Netflix libraries, for example, then simply turning off your VPN won’t work. Turning your VPN off means you won’t be able to access different Netflix libraries anymore.

Before we go any further, it’s important to understand that while Netflix Error Code m7111-5059 means Netflix has detected your VPN it doesn’t mean that Netflix can detect all VPNs.

In fact, Netflix can’t detect any VPN. It can only detect IP addresses that it suspects belong to VPNs.

If you’re using a low-end VPN that shares its servers (IP addresses) with too many customers, it’s going to result if your VPN’s server’s IP address(es) getting blacklisted.

ExpressVPN ($6.67/month) is the best VPN on the market for unblocking US Netflix (and many other Netflix libraries too). If you want to spend a little less, I recommend using Ivacy ($2.25/month) – both of these VPN’s work with US Netflix too, but they’re not as fast (consistently) as ExpressVPN. Meaning you’re more likely to stream Netflix in SD or HD when Ivacy or NordVPN’s servers have a high use load compared to streaming Netflix in 4K with ExpressVPN.

How does Netflix detect VPNs?

I’ve written about this at length – head over to my Netflix detecting VPN article to learn more.

However, the tl;dr version is as follows:

Netflix doesn’t detect VPNs; it detects IP addresses it suspects belong to VPNs. The way it does this is simple. When too many accounts connect to Netflix using the same IP address – more than an average household, for example – Netflix knows the IP address is a VPN server, and it blacklists it.

This is why you are currently seeing Netflix Error Code m7111-5059.

Below I’ve listed the three best VPNs you can use with Netflix. I’ve been using each of these VPNs for the best two years, and they’ve provided reliable connections to US, UK and Canadian Netflix libraries. Take a look at my article Which VPNs still work with Netflix to find out more.

Which VPNs are blocked by Netflix?

Read next: How to watch Amazon Instant Video abroad.