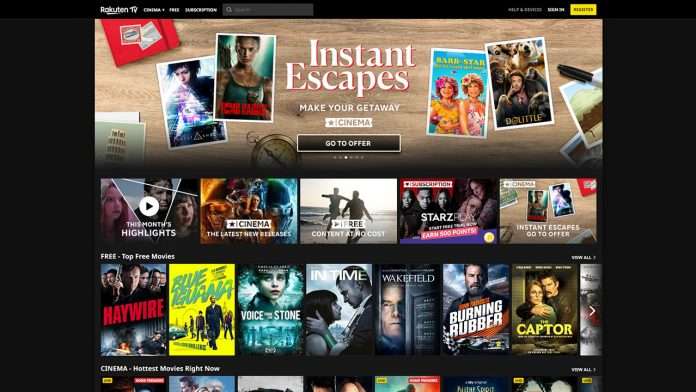 If you’re outside of Europe or Japan, Rakuten TV won’t work. You’ll be able to get on the website. However, you’ll come across an error saying, “We are deeply sorry, but Rakuten TV is not available in your country.”

This can be frustrating, especially if you’re a paying subscriber. Don’t panic though. There’s an easy way to get around this issue.

All you need to do is make Rakuten TV think you’re accessing its content from a country where it’s available.

This may sound complicated, but it’s very simple. All you need is a reliable VPN.

How to watch Rakuten TV anywhere in the world: Quick Guide

To fool Rakuten TV into thinking you’re trying to watch its content from a country where it’s available, you need an IP address based in one of those countries.

The easiest way to get one is using a VPN.

Follow these simple steps to get a reliable VPN that will allow you to watch Rakuten TV anywhere in the world:

What countries is Rakuten TV available?

Rakuten TV is available in over 40 countries in Europe and also Japan. Here are some of them:

It’s important to understand that each Rakuten TV site works independently from the others. They do not share all of the same content.

Why is Rakuten TV blocked?

The reason Rakuten TV is blocked in your country is all to do with its broadcast rights.

The streaming service only has the rights to broadcast its content in a select number of countries.

Rakuten TV blocks users outside these countries from accessing its content to protect itself from possible copyright and licensing issues. If it didn’t do this, it could face severe repercussions.

This is why you’re running into the “we are deeply sorry, but Rakuten TV is not available in your country” error.

How does Rakuten TV block my connection?

Rakuten TV blocks customers outside of its broadcast zones by scanning their IP addresses.

Every time you go online, you’re allocated an IP address. There’s no way of getting around this. You must have a valid IP to go online. The issue here is these IPs contain information that discloses your location to the service you’re connecting to.

When you connect to Rakuten TV, the streaming service scans your IP address, and if it finds you aren’t within a country where it has broadcasting rights, it blocks your connection.

These geo-blocks are why you can’t connect to Rakuten TV when abroad, even if you’re a paying subscriber.

How can I get around Rakuten TV’s geo-blocks?

The easiest way to get around these blocks is by changing your IP address. More specifically, changing it to an IP address from a country where Rakuten TV is available.

A reliable VPN like ExpressVPN ($6.67/month) or Private Internet Access ($2.03/month) will allow you to do this.

Using a VPN to change your IP will fool Rakuten TV into thinking you’re accessing the content from within a country where it’s available. All you need to do is download a VPN, select a country where Rakuten TV has broadcast rights, and you’ll be given an IP address from that country.

This will allow you to watch Rakuten TV from anywhere in the world.

Yes, it does. Rakuten TV, like many other streaming services, tries to block connections coming from VPNs.

Lesser VPNs struggle to get around these VPN blocking techniques. This is because they don’t have measures in place to stay one step ahead of Rakuten TV.

However, there are good VPNs that work well with Rakuten TV.

What VPNs work with Rakuten TV?

The VPNs that work with Rakuten TV are the ones that can stay one step ahead of its VPN blocking methods.

We recommend ExpressVPN ($6.67/month) or Private Internet Access ($2.03/month). These VPNs play a cat and mouse game with Rakuten TV.

When Rakuten identifies an IP address supplied by one of these VPNs, ExpressVPN ($6.67/month) or Private Internet Access ($2.03/month) will close that IP address and open a new one. This keeps them one step ahead of Rakuten TV, and it allows you to watch Rakuten TV reliably from anywhere in the world.

Below is a list of VPNs that all work well with Rakuten TV. They all play a game of cat and mouse with the service, and they all have fast, reliable servers wordlwide.