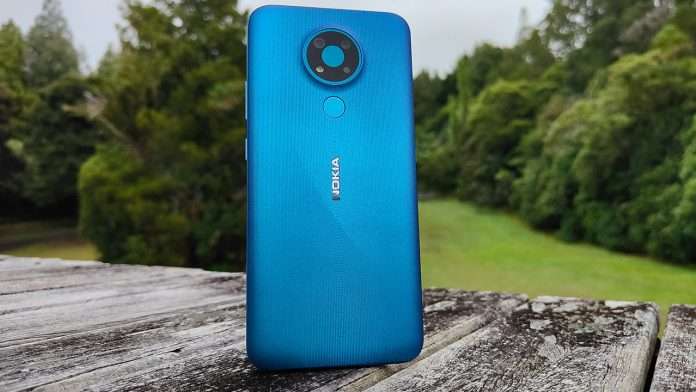 Let’s face it, most of the time, all we need from our phones is messaging, phone calls, web browsing and access to basic apps. And the Nokia 3.4 can do all of that…just not as well as the best phones.

If you’re okay with a cheaper device, the Nokia 3.4 isn’t a bad option. However, it’s a bit slow, the camera doesn’t take the best pictures, and the low 32/64GB storage options severely affect performance when almost at capacity.

The Nokia 3.4 will allow you to do the basics, just expect a significant amount of lag.

At this price point, you need to accept that you aren’t going to be getting the best screen on the market, the highest-quality materials or premium technology like an in-screen fingerprint scanner.

That said, I liked the 3.4s punch-hole screen. It’s a large display that stretches rightout to the edges and makes watching videos a good experience.

The Nokia 3.4 looks like a standard smartphone, but once you pick it up the illusion disappears. Some affordable smartphones sometimes use smooth plastic on the back to simulate (the more premium) glass. Nokia hasn’t done that with the 3.4, and it feels cheap as a result.

That’s not to say it isn’t sturdy because it is. The plastic barely flexes under pressure (a good thing), and it feels like it could survive being dropped a few times (however, I wasn’t brave enough to test that).

The Nokia 3.4 has a fingerprint scanner on the back that works just as it should. It’s a bit slower than other fingerprint scanners, but that wasn’t a significant issue. I did have problems with the dedicated Google Assistant button on the side of the phone. I would inadvertently summon Google Assistant numerous times when picking up the phone or putting it in my pocket, which got annoying.

I was impressed by the look of the circular camera housing on the back of the 3.4. The centred feature looks polished, and there’s only a slight camera bump. I also appreciated that there was a 3.5mm jack that I could use with wired headphones. This isn’t anything new and is quite common on cheaper devices, but it’s nice that it was included.

Overall there isn’t anything that stands out on the design of the Nokia 3.4. It looks good but it feels cheap.

The Nokia 3.4’s display is one of its best features. While it’s obviously not as good as the top of the range devices, it works well and I was impressed by its capabilities at this low price.

It’s a 6.9inch LED display with a 720×1560 resolution. While this isn’t a full HD screen, the colour is fine, and it has a maximum brightness that makes it easy to see when outdoors.

I didn’t have any issues watching Netflix or YouTube on the Nokia 3.4. The image was good enough, and the lack of HDR wasn’t noticeable on the screen.

The 3.4 has three rear-facing cameras, a 13MP primary camera, a 5MP ultra-wide and a 2MP depth camera (used to blur the background of portrait photos)

The quality of the photos taken with the 3.4 were okay, but they weren’t great either. We found that pictures looked grainy and lacked detail. This was most obvious when taking low light photos. Low-light images with the 3.4 are poor. There’s a night mode for low light imagery however we found that it made the blacks very noisy, and the picture quality suffered. We also had significant trouble focussing the camera. A lot of the images we took came out blurry and unfocused.

This doesn’t mean you can’t take good looking photos with the 3.4. You can. It just requires perfect conditions. We found well-lit, vibrant scenes came out the best with the Nokia 3.4, and we took some great photos with the device. It just has to be the right setting.

The video capacity of the cameras is pretty basic. You can film a video in 1080p at 30fps, but there isn’t 60fps filming or 4K. This wasn’t a major issue. However, the lack of stabilisation on the cameras was a nuisance. Videoing with the 3.4 produced shaky footage that looked bad, and it made me hesitant to film videos with the device.

Performance is where the Nokia 3.4 really struggles. This phone is slow. There’s a noticeable delay when opening any app, even lighter apps like a web browser. And navigating the phone isn’t fluid in any way.

The Nokia 3.4 has a Snapdragon 460 chipset and 3GB of RAM, which is only barely enough to get by. The Nokia 3.4 is slow doing everything. The keyboard takes a noticeable second to appear, apps are slow to open and graphically intensive games are unplayable.

The Snapdragon 460 isn’t the problem here – it’s a chipset that has performed well in other devices. So, I suspect its (pretty low) 3GB of RAM is the problem. Multitasking with the Nokia 3.4 is a surefire way to crash apps and slow the phone down to a crawl.

If you require a significant amount of storage on your device, the 3.4 may not work for you. We noticed considerable performance drops when we had the phone almost at the 32GB maximum capacity. Apps were crashing and the phone progressively ran slower as we neared full capacity.

What’s attractive about the 3.4 is that it’s part of the Android One program. This means that there isn’t any third party software that could impact the performance of the device. It runs near-stock versions of Android with limited modifications and a focus on Google services. It also means that the Nokia 3.4 will receive Android updates for at least two years and will be compatible with Android 11. Sometimes we see low-range phones being left out to dry after their release, but that is not the case with the Nokia 3.4 which is good for future patches and fixes.

The battery in the Nokia 3.4 is a standard 4,000mAh battery that lasts just over a day with heavy usage. Light usage could see the battery lasting up to a couple of days. It’s fine.

The battery charging is relatively slow, though. The phone comes with a 5W charger that gets from 0 to 16% in 30 minutes. This is very slow. However, if you have a bigger third party charger, that may speed up charging times.

The main reason for buying the Nokia 3.4 is its low price. It’s an affordable smartphone that will allow you to do the basics, like messaging, calling and using basic apps. It also has a screen that is suitable for watching videos.

But you’ll need to be patient because the 3.4 is slow. Nearly everything you do on the 3.4 is delayed and laggy, and it can get frustrating. The cameras are below average, and while the physical look of the circular camera head is nice, the results aren’t great.

Overall, the Nokia 3.4 is hard to recommend to anyone who wants to do more than the very minimum smartphones allow. If you’re looking for a phone that can do the basics, it will do the job, but it won’t rush them.