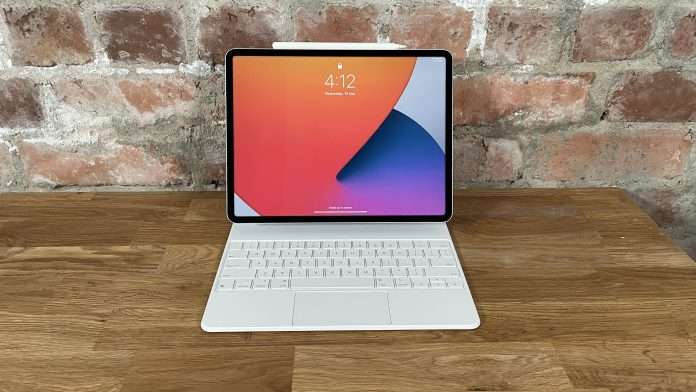 The 12.9-inch iPad Pro needs to be celebrated. Its big 4:3 Liquid Retina XDR display is both immersive and flawless. As is the power of its M1 chip. All in, it’s a remarkable piece of engineering that’s clearly capable of remarkable things.

But if I’m honest, I still don’t fully understand the iPad Pro.

It’s not just me who has trouble understanding who iPad is for. Visit the iPad Pro page on the Apple website, and you’ll see a “Why iPad” tab in the Sticky Menu. Apple doesn’t have this for other products. There’s no “Why iPhone”, or “Why Mac”, or “Why AirPods” links. Clearly, there’s an issue with the iPad.

And the issue is this: it’s difficult to define where the iPad (Pro) stops, and the MacBook takes over.

From a specs point of view, the 12.9-inch iPad Pro has more than enough inside it to do everything a new MacBook Air or MacBook Pro can do. MacOS and iPad OS is now the biggest point of difference between the two devices.

Had Apple given this hardware MacOS instead of iPadOS, I think we’d be looking at the best laptop the world has ever seen. Better, in lots of ways, than the already-excellent M1 MacBooks. Instead, we’re looking at the best iPad the world has ever seen. And I’m not convinced iPadOS is an operating system people want to use for serious work, regardless of what it’s capable of.

Screen technology doesn’t get better than this. The XDR (Extreme Dynamic Range means it surpasses what is considered high dynamic range) shares its technology with Apple’s $5,000 Pro Display XDR.

This means you can enjoy 1000 nits of brightness across the full screen, with a peak brightness of 1600 nits locally.

But there’s an extra ingredient this time too. Mini-LEDs. Well, 10,000 of them, to be precise. They sit behind the display and combine to create more than 2,500 local-dimming zones evenly spread across the screen.

The net sum of all this display jargon is a peerless mobile display that has to be seen to be properly appreciated.“Pro” users, and even casual users who just want to enjoy HDR video content, will love what’s on offer here.

M1 Performance on an iPad!

I’m not sure if it’s a coincidence, good fortune, opportunism, or thorough planning that’s responsible for the M1 chip being in so many different Apple products at a time when there’s a global chip shortage.

Whatever the reason, it works.

I tried my best to make this iPad crash, slow down, even flinch a smidgen, but miserably failed. The (8-core CPU and 8-core GPU) M1 iPad Pro flies. Delivering an (up to) 50 per cent CPU boost on the previous A12Z Bionic chip and (up to) 40 per cent faster GPU performance.

Those of you who follow iPad updates closely will recognise that these are similar performance bumps to what we’re used to seeing with the previous A-series upgrades that used to power the iPad. There’s a reason for that. The M1 shares the same fundamental architecture of A-series, meaning the M1 is more of a natural fit for iPad than for MacBook.

To sum up, the 12.9 iPad Pro is armed to the teeth with processing power. This device has the parts in place to do everything its MacBook, and even iMac, siblings can do.

Whether the iPadOS apps and “touch-first” input is a good fit for this much power is another matter. Will “pros” really choose this device to execute “pro” work in the field? Technically, they can. Whether they will or not remains to be seen.

Apple doesn’t use the iPad to launch its latest and greatest camera tech. Usually.

The Pro has the same rear-facing cameras as last year’s Pro. You get the f/1.8 12MP Wide and f/2.4 10MP Ultra Wide cameras, plus a LiDAR sensor.

The front-facing camera has been upgraded to an f/2.4 12MP Ultra-Wide camera with a 122-degree field of view. But it’s still in the wrong place – located on the left-hand side of the screen when docked in the Magic Keyboard. Ugh.

The new Center Stage feature is brilliant, though, that automatically pans and zooms to keep you “centre stage” when you’re on a video call.

It’s cool and, predictably, works as described. I found it perfect for FaceTime calls with the family when cooking in the kitchen or just pacing around aimlessly while bouncing my baby.

Expect to see this feature roll out to every new iPad and iPhone product launched from now on.

As you’d expect, there are no issues here. You’ll get 9-hours of constant “normal” use on a single charge. This will obviously be less if you’re pushing the iPad Pro to its limits with non-stop video or photo editing.

The Thunderbolt/USB-C is a solid win for the Pro. There’s not a lot new here. But its (up to) 40 Gbps bandwidth is good news for “pros” who need to transfer big files or run 6K(!) external displays.

Apple’s engineers are doing things with small speakers that no other brand is able to do. We’ve seen (heard) it before in MacBook and previous high-end iPads, and the run of form continues here. Bass sounds confident and lifelike, while the mid- and higher-tones avoid the shrillness you often get from smaller speakers.

5G Cellular is yet another part of the iPad Pro’s narrative. It’s a tidy add-on for users who need a powerful mobile device for use in the field, where there’s not always going to be a reliable Wi-Fi connection. 5G cellular solves that problem.

As you’d expect, the 12.9-inch iPad Pro comes with suitable accessories. I’d suggest the Magic Keyboard (available in Black and White for $549) is a must if you’re considering this device. The second-generation Apple Pencil ($239) is more optional, depending on your use. Both are the same as the previous year’s.

There’s definitely a market for a portable, powerful, big-screened, touch-first Apple device. And the 12.9-inch iPad Pro is agonisingly close to being exactly that. Its screen is one of the best things I’ve used. Its brilliance is compounded with the powerful M1 chip, a range of beautifully-designed accessories, and industry leading-camera rigs. But its inability to budge from being only a touch-first device is (almost) a tragedy.

I’ll let you decide whether that’s a good thing or not.