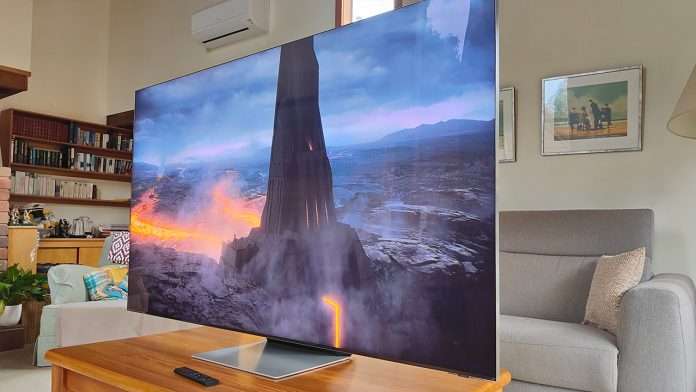 Samsung’s QN900A Neo QLED 8K TV is imposing and stunning. It boasts a fantastic design, a sharp and clear display, rich colours, inky blacks, and it even uses AI technology to upscale content into 8K. It’s a magnificent engineering achievement.

But asking whether this is a good TV or not is a waste of time. It clearly is. A better question is: whether there is any point in buying an 8K TV right now?

As is always the case with new technology, some initial pioneers (usually Samsung) adopt specific tech before it becomes mainstream. It was the same for the first 4K TVs, and it’s the same with 8K TVs now.

There’s an obvious problem with this strategy – there isn’t anything to watch in native 8K resolution. The most popular streaming services like Netflix, Disney+, Amazon Prime, don’t offer 8K.

And while Samsung recognises this and tries to address it with software designed to convert existing content into 8K. It’s not enough.

With that said, the QN900A Neo QLED 8K TV is still one of the best TVs you can buy. And it’ll be even better when 8K Netflix is a thing. But, right now, I’m not convinced investing $11,999 in a TV that can’t be used at full capacity is a good idea.

The QN900A looks excellent. On the surface, it doesn’t look different from any other TV. However, its subtle differences are effective.

The bezel on the QN900A is almost non-existent (0.9mm). This “infinity screen” creates an immersive experience where the image looks like it’s floating. It’s impressive, and it looks great.

There aren’t any ports on the side of the TV. Samsung has opted to use a “One Connect Box.” This box houses all the ports and is connected to the TV by a single cable. It works well.

If you have the TV free-standing, the box can be nicely hidden on the back of the stand. It also prevents having to awkwardly plug things into the side of the TV, if you have it wall mounted.

The “One Connect Box” means Samsung has been able to use the sides of the TV for the QN900A’s internal 80W 6.2.2 channel audio system.

The sound from the ten internal speakers comes out the sides of the TV, not the back. Perfect for wall mounting the unit.

The QN900A uses Samsung’s Tizen operating system. It works exactly as it should. It’s responsive, fast, and simple to use.

Pressing the home button will allow you to select from your favourite apps. Resting on an app will provide more details, and I particularly enjoyed its compatibility with streaming services like Netflix.

Resting on Netflix or Disney+ opens up a new panel displaying the content you have recently watched. You can continue watching from where you left off, simply from the home screen, no need to open the app. It works well.

The remote control also works as it should. With two dedicated buttons to Netflix and Amazon Prime, it’s functional and simple to use. What makes it unique is the way it charges.

The QN900A remote doesn’t have batteries. Instead, it has a panel on the back that absorbs both natural and artificial light to charge it. It’s very cool. However, you’ll need to retrain your brain to leave the remote upside down when you’re done with it.

The QLED TV is bright, and there is almost no bleed-over from light to dark areas on the screen. This is due to Samsung’s “Quantum Mini LEDs.” These LEDs are 1/40th of their usual size. Because they’re so much smaller, there’s more of them, and this makes the lighting more accurate and precise. The results are impressive.

The picture quality of the QN900A is outstanding. The Neo QLED boasts 33 million pixels, and the display is detailed and clear. Colours are rich, and the blacks are deep. You can see a massive amount of detail in every frame. Watching Raya and The Last Dragon and Batman: The Dark Knight in 4K looked spectacular.

Samsung’s Neo QLED 8K TV is powered by the Neo Quantum Processor 8K. This processor houses AI intelligence inside 16 neural networks. This AI analyses content and upscales it to 8K. Basically, the TV uses machine learning to upscale what you’re watching based on similar content.

When content is upscaled to 8K, pixels are stretched. For example, a 1080p video has 1920 pixels horizontally and 1080 pixels vertically. To upscale to 8K, these pixels need to be stretched to 7680 pixels horizontally and 4320 vertically. Usually, upscaling uses bi-cubic algorithms to decide what pixels go where. Samsung uses artificial intelligence.

Upscaling 1080p content to 8K, is a huge jump and usually would result in blocky, jagged edges and blurry images. However, not with Samsung’s Neo Quantum Processor 8K.

1080p content on the QN900A doesn’t suddenly look like a 4K film, but it does look better. Clarity is improved, and it has a smoother overall look. However, I didn’t see much improvement when 4K movies were upscaled to 8K. There was more detail present, however, the differences are only noticeable if you’re actively looking for it.

The QN900A has AMD Freesync Premium Pro built-in, which reduces screen tearing when gaming or watching movies. Games are smooth with a 120hz refresh rate, and the results were great when playing Astro’s Playroom on my PS5.

Samsung has implemented their “Object Tracking Sound Pro” software into the QN900A. This is designed to track on-screen action to create a realistic 3D sound. I didn’t notice this making much difference. However, I was surprised at how effective the internal speakers were.

They were loud, and sounds could easily be distinguished. I appreciated that dialogue came through clear even when significant amounts of action were going on in the background when watching Avengers: End Game.

For review purposes, we were given the Samsung Q950A Soundbar (NZD$2199). This is more than just a soundbar. It comes with three additional speakers to create an authentic 3D surround sound experience. While the internal speakers on the TV are good, once I set up the Q950A, there was no comparison. This soundbar package made it feel like I was at the cinema, and it was very impressive.

Compatible with Dolby Atmos and DTS:X, the Q950A is one of the best soundbars on the market, and it pairs nicely with the QN900A 8K TV, and just like the TV, it’s expensive. But if you’re willing to pay NZD$12,000 for a TV, you may as well get the most out of it and spend a little more.

Samsung’s QN900A Neo QLED 8K TV is an impressive TV. Watching anything on this display looks great. The colours are vivid and detailed, the images are sharp and crisp, and it all looks fantastic due to the minimal bezel.

But all of this is to be expected with a TV that costs NZD$12,000. The majority of that price is going towards the QN900A’s 8K upscaling artificial intelligence. And while it works well, it doesn’t do enough to make it a worthwhile investment.

While it may not be Samsung’s fault, there just isn’t anything to watch in 8K. And it’s a pretty expensive investment for a TV you can barely use at full capacity.

However, with that said, if you can afford it, you’re going to love Samsung’s QN900A Neo QLED 8K TV.