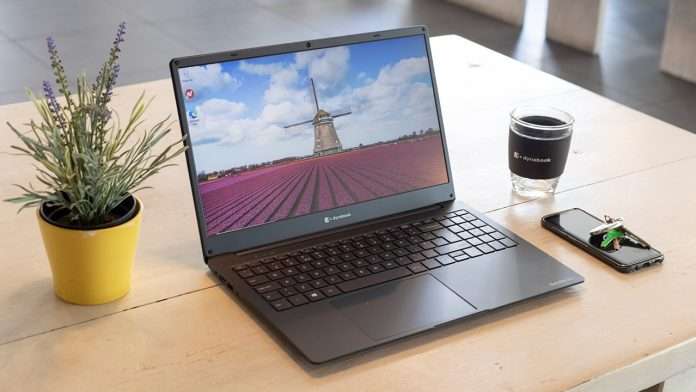 The Satellite Pro is a stock standard laptop. It’s a dark blue rectangle with a “Dynabook” logo on the back. There aren’t any interesting bells and whistles here. However, that’s not necessarily a bad thing.

This is a laptop that knows exactly what it’s trying to be. The Satellite Pro was designed for businesses and schools. And in that regard, it’s great.

The Satellite Pro is affordable, has a good battery, and it’s powerful enough to allow you to use a large spreadsheet without hiccups.

This model is incredibly affordable, retailing for only $1,040.

The Satellite Pro has a relatively unremarkable design. There isn’t anything that stands out here.

It has a traditional business/executive laptop aesthetic. It’s dark blue (black) with the Dynabook logo on the lid. That’s it.

Functionally, it’s reasonably light (1.76kg) for a 15.6inch laptop, and it can be comfortably carried around and used remotely.

It feels sturdy and robust when the lid is closed; however, I did have doubts about whether its plastic build would hold up if I dropped it.

It has a keyboard that works exactly as it should. And it’s large enough to include a Numpad which is excellent for business or schoolwork.

It has a massive trackpad which wasn’t as responsive as I would have liked. I found moving the mouse was slow, and it didn’t always follow my movements accurately. It also feels heavy. Clicking isn’t as easy as it should be. Doing work with lots of clicks was difficult compared to other laptops, and it got frustrating.

The Satellite Pro covers all the bases with the number of ports it comes with. You’ll find an HDMI port, USB-A 3.1 port, and a USB-C 3.1 port on the left side. On the right, there’s a microSD card reader, a USB-A port, a Gigabit Ethernet port, and a 3.5mm audio jack. It also supports WiFi 5 and BlueTooth 5.0. It’s a good amount of connectivity.

The display is a Full HD 15.6-inch screen. There’s nothing special here. It works as it should. In a market full of thin borders, Dynabook has bucked the trend and brought back the thick edges seen on old laptops. This is not an edge-to-edge screen in any case, but when you’re only using it for spreadsheets and writing, who cares.

The one thing I did care about was I found the screen was prone to wobbling. Knocking it would make it wobble substantially, and I had my doubts about its sturdiness when the lid was open.

Just like everything else, the performance of the Satellite Pro C50-H is routine.

The Intel Core i7-1065G7 isn’t going to allow you to play the latest games or the oldest for that matter; however, it’s powerful enough to complete business-oriented tasks. I was able to open several Google Chrome tabs while listening to Spotify without issues.

The laptop comes with 16GB of RAM, which is plenty. Paired with the SSD drive, the Satellite Pro is easily fast enough to accommodate having multiple windows open and flicking between them.

The Satellite Pro doesn’t come with the bells and whistles we now find with top-of-the-range laptops.

It has in-built speakers that aren’t going to make your favourite music sound great, but they’re fine for zoom calls or video conferences.

The laptop also comes with an HD webcam above the screen. This has a dual-array microphone, and it all adds up to provide a reasonable video conference/call performance.

If you’re looking to upgrade to Windows 11 in the future, you’ll be pleased to know that the Satellite Pro comes with a TPM 2.0, which is great for hardware-based security.

Dynabook claims the Satellite Pro can last up to 10 hours, depending on usage.

I found these claims to be accurate. The battery on the Satellite Pro is good.

Annoyingly the battery charges via a DC Power Jack. It would’ve been nice if it charged via USB-C so I could use all my other chargers with the device.

Dynabook’s Satellite Pro C50-H is boring and bland. However, it’s okay with that. It’s not trying to compete with the flash consumer laptops.

This is an incredibly affordable device capable of doing business and school-oriented tasks. It’s made for businesses that need a massive number of laptops for their employees.

It’s fast enough to accommodate large spreadsheets and multiple Chrome tabs, and it has a good enough battery to be used remotely without having to worry about where you’re going to charge it.

If you’re looking for a laptop for your business or school, then the Satellite Pro C50-H won’t cost you a fortune and will do exactly what it needs to. 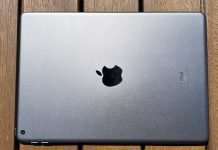