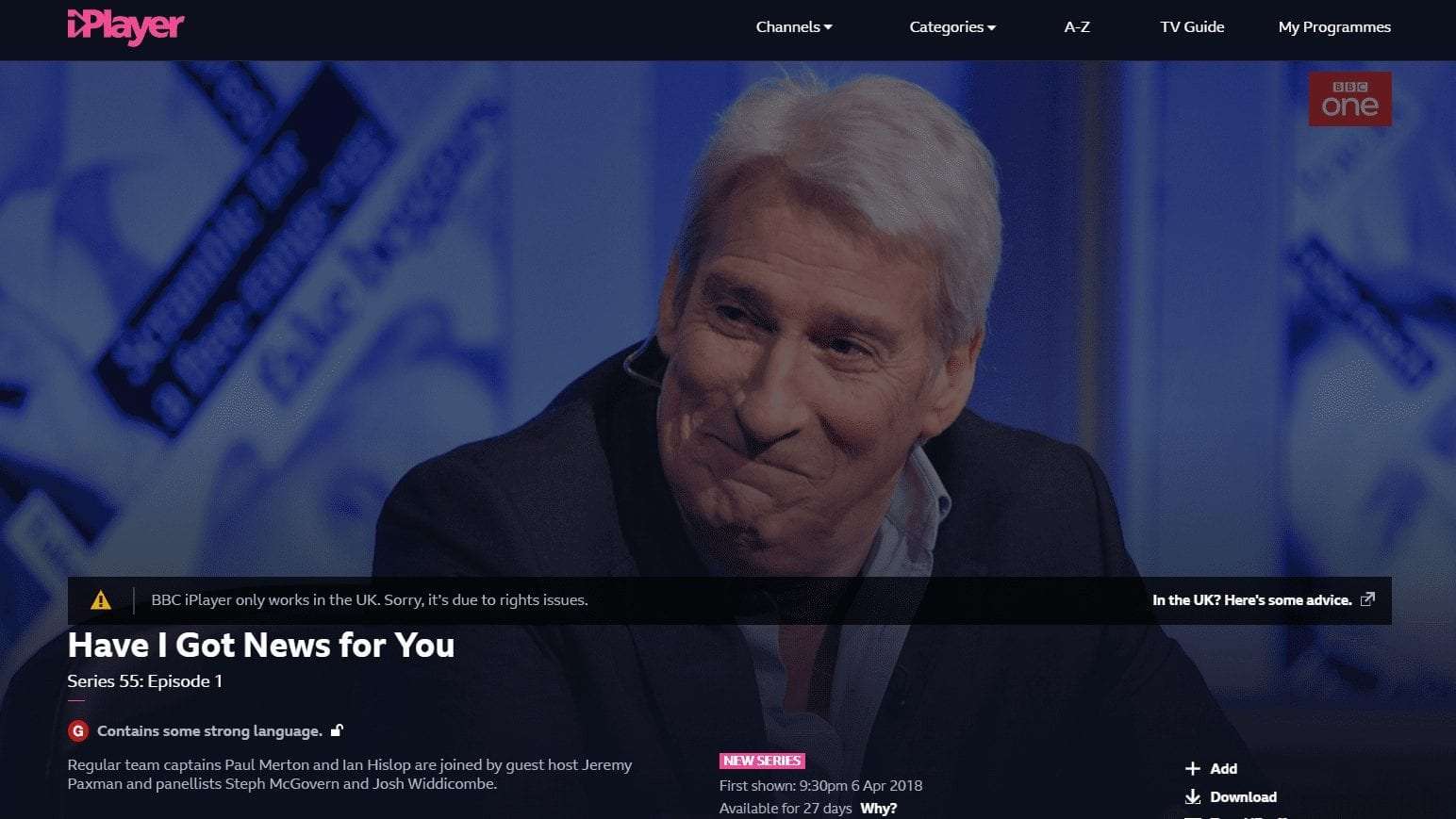 Has BBC iPlayer recently stopped working with your VPN? It’s not surprising. BBC iPlayer detecting VPNs is a relatively new thing. But, don’t worry. There’s a simple fix and I’ll show you the best workaround below.

Until late last year, any VPN that was capable of establishing a fast connection to a server in the UK was good enough to work with BBC iPlayer. Sadly, that’s all changed and iPlayer is now blocking VPNs.

In this article, I’ll explain how and why BBC iPlayer blocks VPNs. I’ve also included the best-known fix for the problem – it’s been working flawlessly since December 2017.

See also: Netflix not working with VPN: How to bypass the Netflix Proxy block?

Why does BBC iPlayer block VPNs?

BBC iPlayer has to block all overseas connections for licencing reasons. The biggest obstacle preventing it, is that Beeb doesn’t hold any broadcasting rights outside of the UK (apart from BBC World Service) so it’s not legally allowed to stream to foreign territories.

Until recently, the BBC turned a blind eye to people using VPNs to “location spoof” and bypass its geo-blocks. Sadly, the problem has become too big to ignore. Users from anywhere in the world have been buying cheap VPNs, for as little as $1.99/month, and have gained access to the entire BBC iPlayer catalogue for free.

This widespread use of VPNs to stream BBC iPlayer had the potential to snowball further and cause real issues for the BBC with content rights holders. And, more importantly, the people who pay the Licence Fee back in the UK – who are essentially footing the bill for this.

How does BBC iPlayer detect VPNs?

The technology behind the ban is relatively simple. It blocks any IP address (internet connection) with abnormal levels of BBC iPlayer activity. This is a big problem for VPNs as their business model is reliant on funnelling large numbers of customers through a relatively small number of servers.

VPN connections are easy for the BBC to detect too. Here’s why:

The average UK household’s IP address would support between 1-6 people using the internet at any one time.  And in this (hypothetical) average house, it’s unlikely that all six connections will be streaming content from BBC iPlayer at the same time.

The behaviour from a VPN’s IP address will look very different. It’s likely to have a lot more than six people using it simultaneously. And as soon as BBC iPlayer detects an abnormally large number connections coming from the same place it blacklists that IP address – preventing it from streaming any more content. Ever.

The solution is to use a VPN that gives you a dedicated IP. This way you’re not sharing your VPN’s connection to BBC iPlayer (with thousands of other customers) so your IP address won’t get blacklisted.

I’ve been using PureVPN’s dedicated IP since December 2017 and have been able to watch BBC iPlayer abroad with zero downtime. The connection is fast and lets me watch BBC iPlayer in HD on my laptop, phone and tablet – and I’m connecting to from New Zealand. That’s the luxury paying an extra $1.99/month affords you.

The dedicated IP feature is only officially supported in the Windows and Mac apps, at present. I spoke to PureVPN about this and they told me a fix is on the way. If you want to use PureVPN’s dedicated IP on your iPhone or Android, there’s still a way. The trick is to use your phone or tablet’s built-in VPN settings.

If you’re an Android user, head over to my article on How to setup PureVPN’s dedicated IP on an Android device, for an easy-to-follow tutorial. If you’re an iPhone/iPad user, you can get in touch with a PureVPN technical support agent via the Live Chat feature on the PureVPN website. From here a PureVPN agent will show you how to connect to your PureVPN dedicated IP using your device’s built-in VPN settings. It’s simple.

Have you found another way to stop BBC iPlayer detecting your VPN connection? Let me know using the comments section below. Thanks.

Read next: Which VPNs still work with BBC iPlayer?