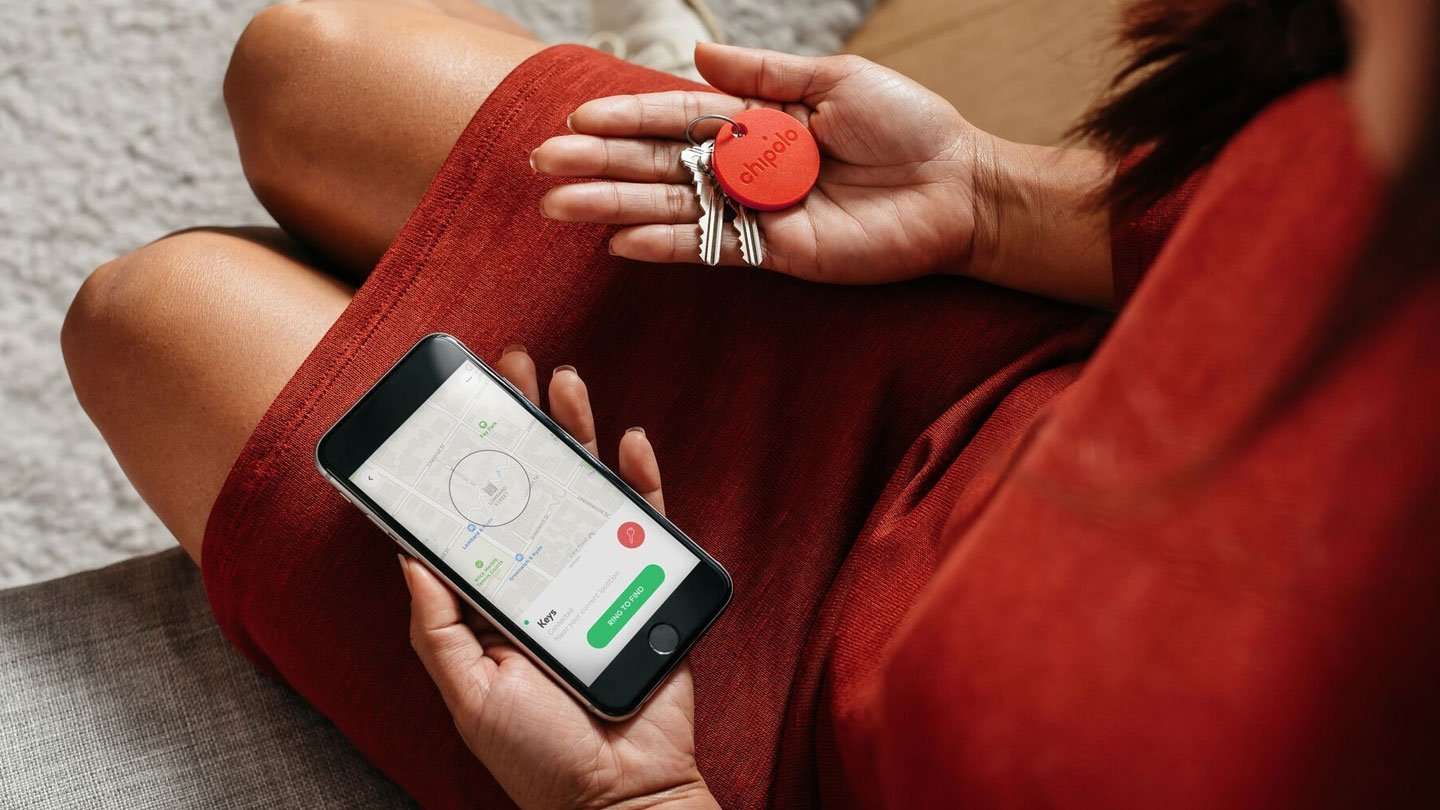 If you misplace your phone, wallet or keys more often than you’d like to admit, a Bluetooth tracker (otherwise known as a Bluetooth finder) can help you find it. In this article, we’ve rounded up the best Bluetooth trackers for uncovering your stuff. See below for links through to each product.

What is a Bluetooth tracker (finder)?

You attach these small, coin-shaped devices to the things you love the most, meaning when your possessions vanish you can see where they ended up using your smartphone.

If you’re tempted by a Bluetooth tracker, you can expect to pay up to around £30. Some brands will give you a slight discount if you pick up more than one.

How does a Bluetooth tracker work?

Unsurprisingly, Bluetooth trackers use Bluetooth technology to communicate with your smartphone or tablet. As this is a low-energy connection, you’ll find that the typical Bluetooth tracker has a battery life close to 12 months.

Each tracker emits a signal that smartphones can pick up on. A Bluetooth signal can only travel so far, though.

What is the maximum range of a Bluetooth tracker?

The trackers in our selection have a claimed Bluetooth range between 25m and 90m. The strength of the signal will depend on what’s between you and the lost item.

Tile is arguably the most well-known name in Bluetooth finders, having released various iterations of its square, gadget-finding gizmo over the years. The Tile Pro is the priciest tracker the brand sells, but the Pro is also the most capable and the furthest-reaching. If you’re used to losing your valuables, the Tile Pro can lend a helping hand.

This mini tracker, which is compatible with iOS and Android devices, weighs in at just 15.5g. Once you’ve unboxed the Tile Pro, attach or stick it to an object you want to keep an eye on. Next, you’ll need to install the companion app on your smartphone. The free-to-download Tile app lets you spot the location of the tracker on an overhead map. If it’s out of sight, you can also have Tile Pro play a loud tune, making it easier to find.

On the other hand, if you have your Tile Pro in-hand but it’s your smartphone that has gone walkies, press down twice on the tracker – doing so makes your phone ring (even if it was on silent mode).

A unique community feature means there’s still hope if your missing, Tile-equipped item is outside of your own tracker’s 90m range. Trackers owned by other users act as look-outs. In other words, if your belongings are discovered by another person’s Tile Pro, you’ll be alerted as to its whereabouts. The process is ‘100% private, so no one knows you’re looking for a lost item but you’.

Verdict: The most feature-packed Bluetooth tracker on the market, backed by a quick setup, easy-to-use app and nifty community function. If you’re tired of losing your keys, you should grab one. 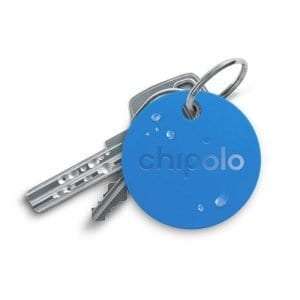 The Chipolo Plus might turn your head if you’re looking for a recommended Bluetooth tracker cheaper than the Tile Pro. This tracker works hand in hand with an accompanying smartphone app for iOS and Android, but range is slightly lower than the Tile Pro at 60m. The app monitors your Chipolo’s last known location.

If you’re sharing valuable objects between family members (a set of car keys, for example) you can send Chipolo information to other smartphones. Once everything is synced, co-owners can track the location of the same tracker – that makes the search a little easier. On top of that, marking an item as lost in the app means you’ll receive a notification when any other Chipolo user comes near it.

The Chipolo Plus can chat with Google Assistant and Amazon Alexa smart hubs, which is undeniably handy. If you have a Google Home sat in your living room, you can try barking ‘Hey Google, ask Chipolo to find my phone’.

Available in six different colours, the Chipolo Plus is also water resistant. Its makers boast that the tracker has a 1-year battery life, and when it’s getting low on juice the smartphone app will let you know. You’ll have to pay for a replacement device, though.

Verdict: A solid, cheaper alternative to the Tile Pro. We were impressed by the simplicity of the smartphone app. 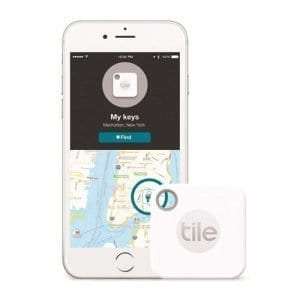 As the Tile Pro’s cheaper sibling, the Tile Mate has a shorter range of ‘up to 45m’. It shares a similar design with the Pro, but is even lighter at just 7g. Both trackers use the polished Tile smartphone app with access to ‘one of the world’s largest lost-and-found communities’. This Bluetooth tracker has a claimed battery life of one year.

The Tile Mate may be more affordable than the Tile Pro, but it still gives you the features that matter. You can use your smartphone to make the Tile Mate ring when it’s hiding from you, and a double-press on the tracker itself makes your mobile cry out.

Verdict: A versatile and compact Bluetooth tracker that’s a breeze to use. It won’t hit your wallet too hard, either. 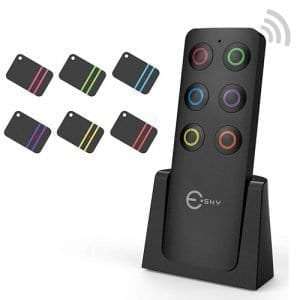 This tracking accessory has more individual parts than the other products in our list, but the core principle is the same – use a remote to hunt down your belongings at home.

The Esky key finder package comes with a six-button remote (and a base for it to sit in), six receivers in different colours, batteries for the receivers, key rings and adhesive strips. Each receiver acts as its own tracker and you can attach those to laptop bags, TV remotes, keys and wallets. When you press a button on the remote, the corresponding tracker will beep loudly until you press a second time.

You’ll need to install batteries in each receiver, but we appreciate the fact that everything you need comes in the box.

Verdict: With a claimed range of up to 25m, this tracking hub is designed to stay put in your house. It’s a fantastic help if you’re regularly misplacing items, but note that pricier trackers have better range.

The Tile Slim is the Bluetooth tracker to go for if you’re looking for a device small enough to slip inside your wallet. It’s about as thin as two credit cards stacked on top of each other, making it one of the thinnest Bluetooth trackers in the world.

This tracker has the same key features as the other gadgets in the Tile range. That means community support, an invaluable smartphone app and the ability to press the Tile to locate your phone. A sticky back on the Tile Slim means it can attach to whatever you need it to.

Over half a million lost items are found with its trackers every day. Not bad at all.

Verdict: If you need a Bluetooth tracker specifically for your wallet, this is the one to go for.

Read next: The 8 best home rowing machines for ANY budget