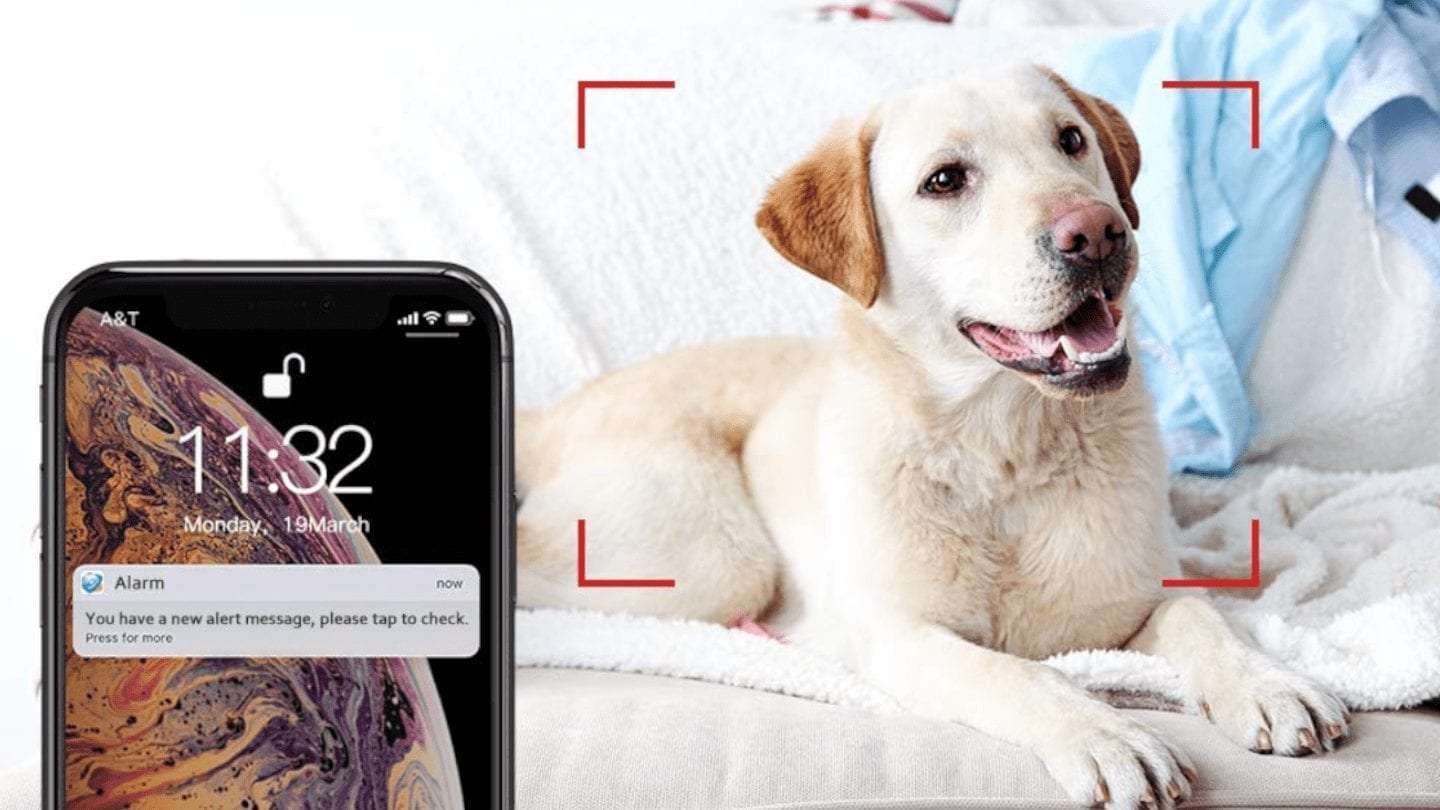 If you want to see what your pet gets up to while you’re outside the house, you’ll need a pet camera. By setting up a pet camera in your house, you can watch live video during the day or late at night. Our expert guide uncovers the best cheap pet cameras with two-way audio, letting you talk to your pet from another room.

Shop around for a pet camera with two-way audio and you’ll see there are plenty of bargain models. To help you sort the best pet cameras from the worst, we’ve rounded up five top-rated pet cameras.

Our guide on the best cheap pet cameras with two-way audio covers Amazon-listed brands including CACAGOO, ieGeek and Wansview. Keep scrolling to see which pet cameras are worth your money.

What is a pet camera?

Pet cameras are plug-in cameras that sit in your home and keep an eye on your animals. They can be mounted to walls or placed on a living room table.

Depending on the camera you buy, you’ll be able to configure mobile alerts when movement is detected or record footage at specific hours of the day. As the best cheap pet cameras let you speak through them, they’re popular with pet owners who need to comfort pets with separation anxiety. 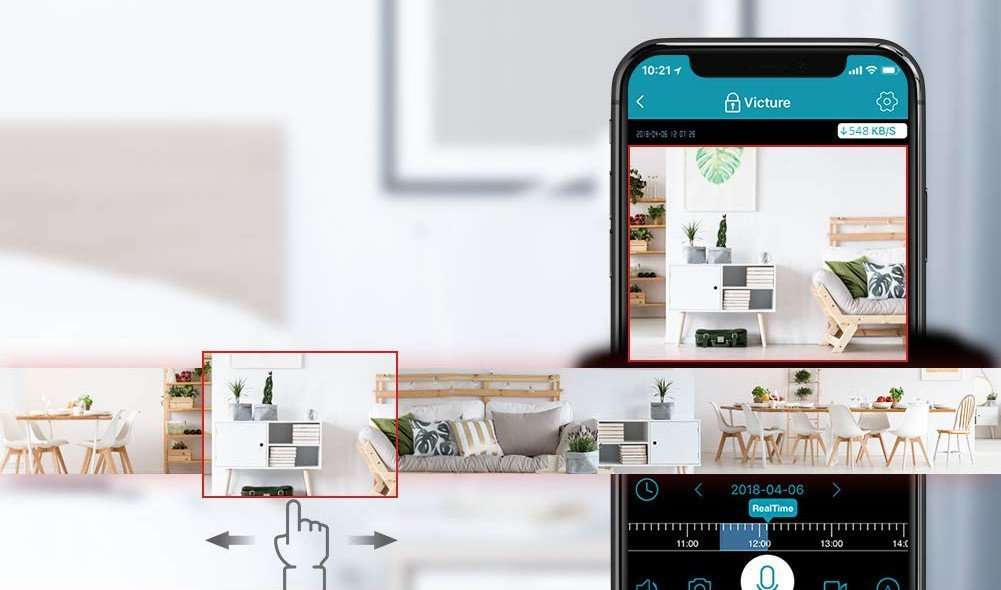 For video storage, you have two options. Some cheap pet cameras have a built-in Micro SD card slot, which means the footage is saved offline. You can take out the card, plug it into your computer and look at it whenever you need to. Other pet cameras use a cloud-based system that saves your clips online. But note that cloud storage is often a paid-for extra.

Most pet cameras pair with a smartphone app. From your phone, you can edit clips saved by the camera and export them. That way, you can keep them in your phone gallery or upload them to social media for giggles.

How much does a pet camera cost?

The pet cameras we’ve included in our guide cost less than £50, so there’s plenty of choice if you’re on a budget. Even cheaper pet cameras ship with handy features such as night vision cameras, two-way audio and cloud storage. 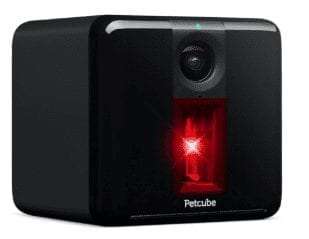 But if you’ve got more money to play around with, you might want to invest in a pet camera that lets you directly interact with your pet.

High-end pet cameras such as the Petcube Bites (£179) and Petcube Play (£249) incorporate toys for your animals to play around with.

The Petcube Bites also acts as a treat dispenser – you can fire out treats to your keen dog with a single tap on your smartphone.Meanwhile, the Petcube Play lets you distract playful cats with the built-in laser pointer.

Pet cameras: features to look out for

When it comes to shopping for a cheap pet camera, consider the following:

Below, we’ve uncovered the best cheap pet cameras with two-way audio under £50. Click on any of our Amazon links to get taken straight to the product page. 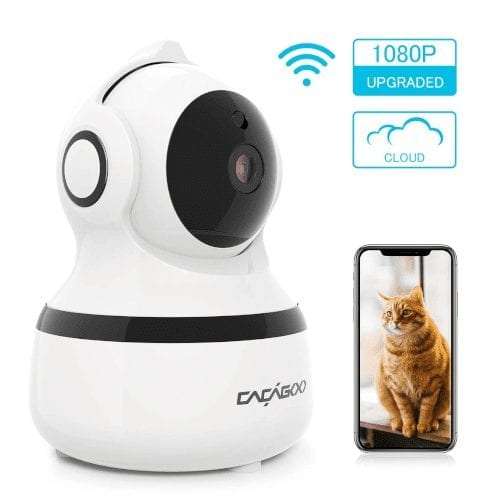 This cheap pet camera films at 1080p to help you keep an eye on your furry friends. It supports 355-degree horizontal rotation and 155-degree vertical rotation, so you’ll be able to spot your pet even if they’re hiding in a corner of the room. At less than £25, this pet camera is superb value for money.

You’ll never be out of the loop with this Wifi-enabled pet camera. When it detects movement, the camera sends alerts to your smartphone or tablet. Those alerts can be customised so you don’t get overwhelmed with messages every time your dog rolls around in their sleep.

Even though this cheap pet camera is on sale for a budget price, it still provides a view of your home in the dark. The CACAGOO pet camera can see ‘up to 10m’ in the dark, with its infrared LEDs automatically activating in low-light conditions.

As this pet camera has two-way audio, you can chat with your pet remotely. The CACAGOO pet camera has a built-in microphone and speaker, letting you speak through your smartphone or tablet. Logging into the mobile app at any time lets you see what the camera has captured. 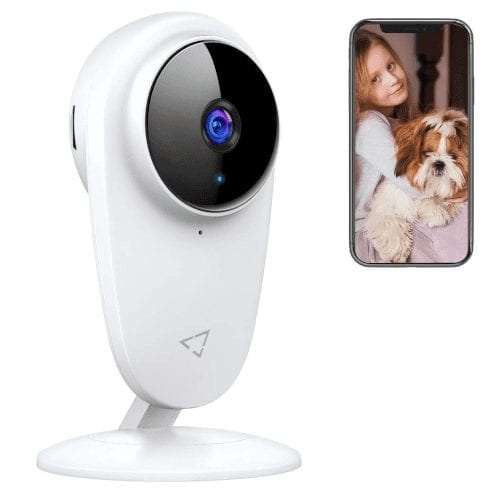 An adaptable design means you can mount this camera to a wall, ceiling or table. It comes with two-way audio, so your pets will be able to hear your voice through the integrated speakers.

Open the mobile app to look at the camera’s view and you’ll be staring through a 120-degree wide-angle lens. LEDs that circle the lens will light up in low light so you always get a great view of the action.

The first month of cloud storage with the Victure pet camera is free, but that becomes a paid-for service after that initial period. Alternatively, you can buy an SD card, slot that into the camera and have your footage stored offline.

The ieGeek pet camera uses a 1080p camera to film what your pets get up to at home. It flaunts accurate activity alerts and handy motion-tracking technology, letting you know if something exciting is happening.

To make sure you don’t get bombarded with smartphone messages, the ieGeek pet camera lets you tweak alert frequency and camera sensitivity. When movement is detected by this brainy pet camera, it’ll record a quick 6-second clip and send it straight to your phone. According to ieGeek, this pet camera can ‘detect moving objects and automatically tracks and capture their movement’.

Even when you flick the lights off, the ieGeek pet camera is still able to monitor your home. It offers advanced night vision to provide clear footage in the dark. The IR lights can also be turned off if you’re worried about glare.

From the ieGeek pet camera smartphone app, you can view your recorded timeline and save the entertaining parts right to your device. Two-way audio lets you talk to your pets at any time.

This cheap pet camera works best with an SD card. You’ll have to buy one separately, but once you have all of your footage will be stored safely offline. You also have the option of using the ieGeek pet camera cloud service – that means your footage is safe even if the Micro SD card breaks or the camera is broken or stolen. 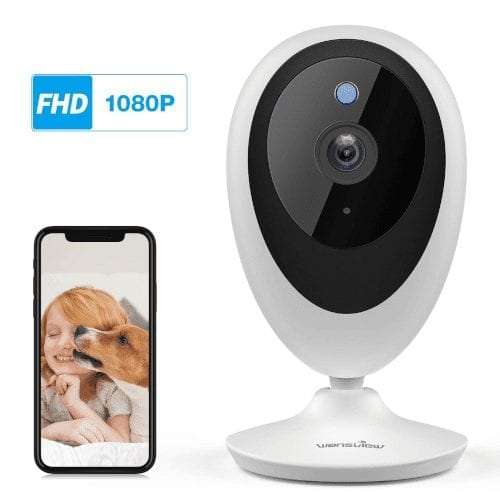 The Wansview pet camera is a great budget pick. It films at 1080p resolution, has a 125-degree wide-angle lens and provides stutter-free streaming over your home Wifi network. As this camera has two-way audio, you can chat with your pet from your mobile phone.

This is another example of a capable, cheap pet camera that uses night vision mode. According to Wansview, this pet camera can use its night vision to see ‘up to 5 metres’ in complete darkness. If you’re shopping for a camera to also serve as a general home security gadget, this is worth a closer look.

Once the Wansview pet camera picks up on movement, it’ll capture a 10-second video clip automatically. Like the other pet cameras in our roundup, this model sends over real-time alerts to your phone. Opening up the Wansview app will give you more details on what’s going on.

The whole family can take a look through the eyes of this cheap pet camera. Up to four users can view the live feed simultaneously from an iOS or Android device. Tapping the ‘Settings’ button from inside the Wansview app lets you invite family members to view the camera. 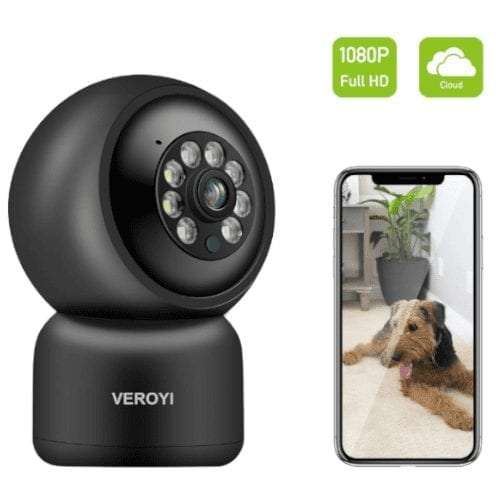 The Veroyi camera pairs effortlessly with your home Wifi network to send over recorded clips to your smartphone. It uses a 1080p camera with a zoom lens to capture the action. It supports 355-degree horizontal rotation and 90-degree vertical rotation. Stick the Veroyi pet camera by your dog’s bed and watch them snooze from another part of the house.

To save you the trouble of fiddling with settings in the app, the Veroyi camera automatically switches to night vision mode when it needs to. A total of four lights help the camera focus on objects in the dark.

When a motion alarm is triggered, alerts are sent to your phone. To give you even more control, you can customise the motion detection area and the sensitivity level of the camera.

Two-way audio will let you calm down a puppy that’s dealing with separation issues. You could also use the built-in speaker to pass on a message to another family member in the same room as the camera. You’ll need to download the Veroyi smartphone app to get things started.

This is another cheap pet camera that uses an SD card to keep your memories safe. You can take it out of the camera at any time, plug it into a computer and make copies or share the footage elsewhere. Cloud storage is also an option, but there’s a monthly fee. All the videos uploaded to the cloud are encrypted to prevent leaks and maintain your privacy. Up to 10 different devices can connect to the Veroyi pet camera.

Read next: The 6 BEST robot vacuum cleaners under £300