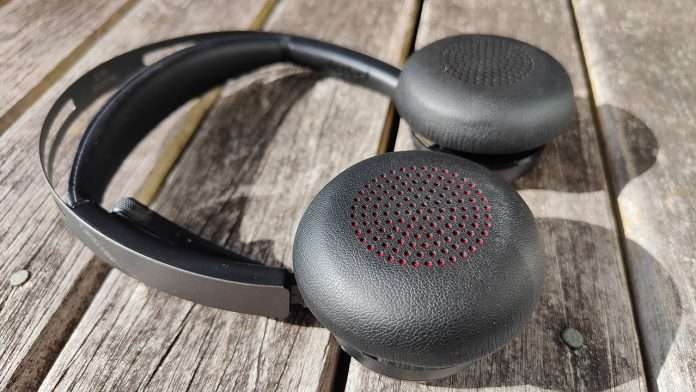 The Voyager Focus 2 is a premium headset designed for working at home or in an office.

It has premium features like active noise cancellation and Acoustic Fence microphone technology that make it an ideal headset for a noisy workplace.

Poly’s Voyager Focus 2 headset is a premium headset with advanced features, and its price reflects that.

At the moment the Voyager Focus 2 isn’t available in NZ and only has US prices.

The headset comes in three versions. The headset on its own costs USD$340. You can accompany the headset with a charging stand for USD$350 and there’s an Office edition which allows you to connect the headset to a landline phone for USD$460

I was given the Voyager Focus 2 UC USB-A version for review purposes, which comes with a charging stand.

The Voyager Focus 2 is an on-ear headset. On-ear headsets are often uncomfortable after prolonged use. However, I didn’t have this problem with the Focus 2. It’s very comfortable.

This is due to the headsets’ classy design. It’s incredibly light, and you hardly notice it resting on the top of your head or on your ears. The ear cushions and headband are cased with soft leather and the headband has a sling design, with adjustable connections on the sides. It adjusted to my head perfectly.

Adjusting the length of the headset is also simple. Often I have found it hard to get both sides of my headset the same length, however, Poly has included adjustment scales that allow you to easily click both sides of the headset into place. It’s a minor feature however it’s one I appreciated.

The microphone is sturdy and unobtrusive. It can be deployed both forwards and backwards so the headset can be used on either ear. It also has a small magnet inside that holds it in place when it’s not being used. It works well.

The headset comes in both USB-A, and USB-C variants and the costs are the same.

Setting up the Voyager Focus 2 and its charging stand is easy. It’s as simple as plugging it in.

The headset comes with a wireless BT700 USB-A adapter for extending wireless range and is useful when using a PC that doesn’t have Bluetooth.

It also supports Bluetooth v5.1 which I could use with my phone.

The Voyager Focus 2 has premium features that set it apart from the competition.

Obviously, the Focus 2 can be used at home, however where it truly comes into its own is in busy offices, especially call centres where there’s lots of noise.

The headset has active noise cancellation with 3 levels that can be changed via a button on the earcup. While it isn’t as effective at cancelling outside noise as the best consumer headsets on the market, it was effective at making the drones of an office or other people talking unobtrusive.

I appreciated that it didn’t cancel out everything, allowing me to hear the phone ringing when I had accidentally left my headset on.

The microphone has Acoustic Fence technology which basically means it creates an acoustic barrier around your mouth and in front of your face. This barrier stops outside noise being picked up by the microphone. It’s very effective.

Talking to my partner, she could barely hear any outside noise, even when I had someone talking 2m away from me. It’s great.

There’s a number of easy to access controls on the side of the headset. These include volume up and down, ANC adjustments, microphone mute and you can answer calls by tapping the middle of the earcup. These are all responsive and I didn’t have issues with the controls.

The headset also comes with integrated voice assistants. It supports Siri and Google Assistant and these work as they should.

The Focus 2 is easy to charge. With my version, I could charge it directly via a micro-USB port. I would’ve preferred a USB-C port so it would work with all my other chargers, and wisely, Poly has included that in another model. However most of the time I was content to use the charging stand.

The headset has a decent battery life of 19 hours with ANC turned off and 16 hours with it on. It’s more than enough to get you through a busy workday.

The Focus 2 only took two hours to charge using the micro-USB port and it was about the same using the charging stand. It’s impressive.

Poly’s Voyager Focus 2 is a brilliant headset. It’s comfortable, easy to use, easy to set up and it has premium features that are responsive and work well.

These premium features cost more, and in this case a lot more. The Focus 2 is expensive. For a work-at-home headset, it’s pricey.

The Voyager Focus 2 is ideal for a call centre or a workplace that has lots of noise. The ANC and Acoustic Fence technology makes it feel like you’re having a one on one conversation, which is great for users on both ends of the call. It’s not until you’ve used a cheap headset, like I did when I was working in recruitment, that you realise how much better the Voyager Focus 2 is.

For a call centre, you’ll want the Office version of the headset so you can connect it to landline phones. However, it’s over USD$100 more expensive. Maybe you’ll have to convince your boss to make the extra investment, because once you’ve used the Focus 2 you won’t want to go back to a cheap headset.