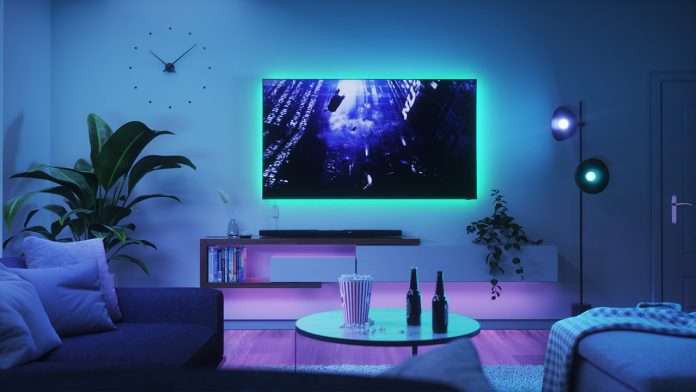 The Nanoleaf Essentials Lightstrip is an affordable LED strip that’s great for the basics. It allows you to change the colour and the temperature of the strip and that’s about it.

It has an impressive array of colours, it’s easy to set up, it’s Thread enabled and compatible with Apple HomeKit and Google Home. However, the poor Nanoleaf app (see below) and consistent Bluetooth connectivity issues hold it back from being a great affordable LED strip.

The Nanoleaf Essentials Lightstrip sits in the middle of the price range for smart LED strips. It costs NZD$100 (USD$49.95; £42.99). This is cheaper than its main competitor the Philips Hue light strip that costs NZD$119 (USD$66.36; £69.00) but more expensive than the Lenovo Smart lighting strip which costs NZD$49.99

Setup is a breeze

This is one of the first LED strips I have set up, and while it was easy, it wasn’t as simple as screwing in a lightbulb.

With that in mind, the instructions that came with the Nanoleaf Lightstrip were demoralising. They don’t help. Thankfully, the install process is straightforward enough, though I’d suggest watching a few videos before you start.

Note that although the instructions show that you can cut the LED strip, you won’t be able to use the offcuts unless you have another power source (don’t make the same mistake I did).

The 2m LED strip has 21 LED sets per meter and on the back is a peel-off, sticky surface that feels very secure on my wall.

The LED strip also comes with a control switch that has two 3M adhesive patches on the back. These were secure, and it made it easy to hide the control switch beneath (or beside) my LED strip. It all works well.

Nanoleaf claims the LED strip can accommodate 16 million different colours. I, obviously can’t verify this, but I can say the LED strip has a good range of colours. The colour temperature range of 2700k – 6500K was impressive too, and you could clearly see the changes in warmth when altering this setting.

The Nanoleaf Essentials Lightstrip’s average brightness is 2000 lumens with a maximum brightness of 2200 lumens. Which, in plain English means “very bright”. I love how it looks in a dark room.

The strip is also compatible with Circadian lighting, which allows you to pick three colour temperatures, from morning, daytime and night with the strip changing colour automatically. It’s a great feature.

The Nanoleaf Essentials Lightstrip is compatible with Apple HomeKit and Google Home. You will need a Smart Speaker with Google Assistant to use the strip on Google Home.

Pairing the strip with HomeKit or Google Home allows you to use voice activation via Siri or Google Assistant to control the lights.

The Nanoleaf app does the basics – like changing the colour of the strip – well. It’s also Thread-enabled, which is a big deal for a budget smart light. Though it’s important to know that in order to use Thread connectivity with your Nanoleaf LED strip, you need a compatible border router – a border router is used to connect a Thread network to other IP-based networks like WiFi or ethernet – like the HomePod Mini.

While Thread doesn’t allow you to do anything more than a standard Bluetooth connection, it’s much better wireless technology for controlling the Nanoleaf LED strip as it’s significantly faster and more reliable – with almost no perceivable lag.

If you’re serious about having smart lighting in your home, you want to use Thread connectivity. Which is why it’s a great feature for a LED strip at this price.

The Nanoleaf App is a bit hit and miss. While changing the colour of the lights is simple and accessible, it doesn’t go much further than the basics. Though, I had significant difficulties getting the app and my LED strip to communicate, and there wasn’t much guidance provided for more advanced features.

I also found connectivity was an issue. This can be made better if you use Thread connectivity, however, that’s an extra investment you might have to make, and I feel it  should work better when using Bluetooth.

The Nanoleaf Essentials Lightstrip is affordable, sturdy and easy to set up. It has a large range of colours and impressive  features like Circadian lighting.

The Nanoleaf app is unnecessarily complicated and vague, though. And I found the strip didn’t work very well when using a Bluetooth connection. Which is a niggle unless you already have a Thread network setup.

Overall the Nanoleaf Essentials Lightstrip is a good, basic LED strip. It allows you to change the colour and brightness of your lights, and if that’s all you need, it’s good enough to get the job done.