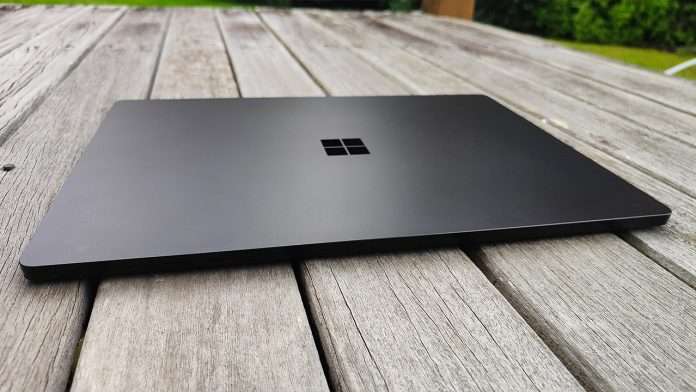 If you were to look at Microsoft’s Surface Laptop 4, you’d be forgiven for thinking it was the Surface Laptop 3. Microsoft’s latest home and business laptop looks almost identical to its predecessor. There’s nothing unique here. But that’s not necessarily a bad thing. Why change a winning formula? It looks great.

With that said, a premium laptop will always be compared to the best in the business, and the Surface Laptop 4 still doesn’t meet the high-performance benchmarks set by Apple’s latest M1 MacBooks.

The Surface Laptop 4 will appeal to those looking for a great-looking laptop running Microsoft’s OS. But if you’re looking for the best laptop on the market, at a similar price, you still can’t beat the M1 MacBooks.

As is usually the case with Microsoft laptops, the Surface Laptop 4 comes in various configurations. The base 13.5-inch model comes with a Ryzen 5 processor, 8GB of RAM, and a 256GB SSD. This costs NZD$1749 (USD$999; £999). Similarly priced to the latest MacBook Air.

Somewhat confusingly, the highest tier Surface Laptop 4’s replace their AMD Ryzen processors with Intel hardware. The best Laptop 4 configuration you can get, is a 15-inch model with an 11th-gen Intel Core i7 processor, a 1TB SSD, and 32GB of RAM. This costs NZD$3399 (USD$2399; £2399)

There’s nothing very unique about the Surface Laptop 4. This isn’t to say it looks bad. It’s a very nice-looking laptop. There just isn’t anything “new” about its design.

There isn’t much difference between the weight of Surface Laptop 3 and the Surface Laptop 4 either. The latter is slightly thinner (1.4cm) and lighter (1.3kg), and that’s it.

It’s a very sleek laptop. Its minimal design looks great. Other than the ports on the side, there aren’t holes that can be seen anywhere on the laptop. The speakers are under the keyboard, and it gives it a nice one-piece aesthetic.

While we’re on the ports, there aren’t nearly enough of them. The Surface Laptop 4 has one USB-A port, one USB-C port, and a headphone jack. It’s just not enough. Also, the USB-C port doesn’t support Thunderbolt 4, which is a setback.

The Laptop 4 comes in four colours, Ice Blue, Sandstone, Platinum and Matte Black. Our review model was Matte Black, and it looks brilliant. However, I did find it was prone to smear and fingerprint marks.

If you love the short-travel keys found on previous Surface keyboards, you’re going to enjoy typing with the Surface Laptop 4. With that said, I didn’t love it. The buttons feel “soft” to touch. There isn’t any pushback when pressing the keys. It’s great if you’re in a library and you want to type quietly. However, it often felt like I hadn’t pressed a key when typing because there’s no physical feedback. It didn’t flow well.

The 15-inch Surface Laptop 4 has a 2496 x 1664 resolution display with a 3:2 ratio, and it looks great. While it isn’t 4K, it offers a better resolution than most 15-inch laptops on the market. The 3:2 ratio gives it a square shape which is great for reading articles and scrolling because there’s more verticality to the display. It works well.

The screen isn’t an edge-to-edge display, and the Laptop 4 does have relatively large bezels all around it. For my Matte Black model, this wasn’t too much of an issue, as it looks like part of the build. However, it will definitely be more noticeable in any of the other colour configurations. It looks a bit dated.

It also doesn’t get very bright, even when plugged in. The slightest bit of sunshine on the screen made it hard to see, and I found I was squinting a lot when using the Surface Laptop 4. It has a maximum brightness of 334 nits which is quite a bit less than the MacBook Pro’s 429 nits as a comparison.

Our Surface Laptop 4 review model had a Ryzen 7 3780U processor and 16GB of RAM.

This configuration was able to handle most of what we threw at it. This is a laptop designed to be used as a business laptop. It isn’t designed for gaming, and video editing is a bit of a stretch.

It was able to handle numerous Chrome tabs open while listening to Spotify and watching YouTube, without any slowdowns. It works well for this sort of usage. However, don’t expect much more than that.

Strangely the Surface Laptop 4 was equipped with an AMD Ryzen 7 processor, which is part of the 4000 series. This isn’t the best of what AMD has to offer. Their flagship 5000 series processors have been available for a while now.

The Ryzen 7 3780U is still a very good processor that utilises eight average cores. However, it doesn’t compare to the effectiveness of the M1’s four high-performance cores and four lesser cores.

The battery life on the Surface Laptop 4 is dependent on the configuration you choose. Obviously, the 13.5-inch model will have longer battery life than the 15-inch model.

With our Ryzen 7, 15-inch model, we got just under 11 hours worth of battery. This is way off what Microsoft claimed, but it’s still very good for a 15-inch laptop with this display. It’s a massive improvement on the Surface 3’s, 7 hours, and will easily last a full-day workload.

Microsoft’s Surface Laptop 4, doesn’t do too much to rock the laptop market.

The Surface Laptop 4 has maintained its classy and minimalistic look, and clearly, Microsoft has focussed on improving areas where the Surface Laptop 3 struggled. And in this regard, they’ve done well.

The Surface Laptop 4 does what it’s designed to do, and that’s fine. It’s more powerful than its predecessor, it can handle typical workloads with ease, and it has a great display.

If you’re looking for a laptop running Microsoft’s OS then the Surface Laptop 4 won’t let you down. However, it’s still a long way off the superior M1 MacBooks.

Apple has dominated the laptop market with the release of its M1 MacBooks. For a similar price, you can get a laptop that can do everything the Surface Laptop 4 can do and a whole lot more. You just need to be comfortable working on a Mac.