The number of malicious attacks on Macs has increased again in 2018. One of the most threatening new viruses is OSX/MaMi (also known as OSX/DNSChanger). Below we’ll explain how this malware finds its way on to Macs, and also what it does that makes it so nasty. More importantly, we show you How to remove OSX/MaMi from a Mac – it’s easier than you think.

It’s a nasty piece of Malware that changes your Mac’s DNS settings – which is why it’s sometimes referred to as OSX/DN Schanger.

Changing DNS settings allows an attacker to reroute internet traffic through a server of their choice. This is dangerous because it lets an attacker intercept all any data that’s inputted by an unsuspecting user. This includes passwords and other private information.

Like most pieces of Malware, it relies on human error to infect Macs. The main way OSX/MaMi finds its way on to Macs is via phishing emails pretending to be from official Apple support. Users who follow the links in the email then inadvertently download OSX/MaMi files (and grant permission) on to their Macs.

This is a dangerous piece of Malware because OSX/MaMi doesn’t show the normal signs of an infected Mac. Infected Mac doesn’t run any slower, suddenly crash or hold files ransom until users make a payment. The only change that’s been made is the rerouting of internet traffic. This is why OSX/MaMi is referred to as an “invisible” virus.

How to remove OSX/MaMi from a Mac? 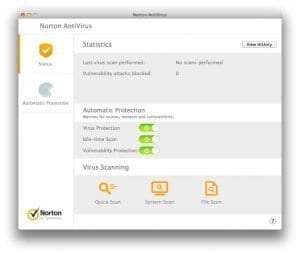 The best way to remove OSX/MaMi from your Mac is to install Mac Antivirus. We recommend Norton Antivirus for Mac because it posted the best scores in our group test of the Best Mac Antivirus programmes of 2018. It also had the smallest footprint on a Mac’s system load of all the Mac AVs, boasting just 1.5%.

After installing Norton Security, or another Mac Antivirus software, all you need to do next is perform a scan of your Mac. This can take up to a few hours depending on how much data you have stored on your Mac. During the scan, your Mac AV will Quarenteen or Remove any known or suspicious threats on your Mac.

Installing a Mac Antivirus will also prevent malicious files from infected your machine in the first place.

How to remove OSX/MaMi from a Mac: Step-by-step guide

Read next: How to Remove the Fake Adobe Flash Player Update Virus on Mac.