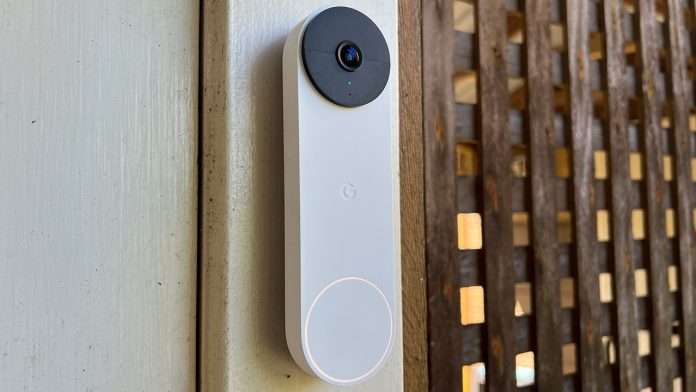 The Google Nest Doorbell doesn’t do much to shake up the smart doorbell market.

It has all the features you’d expect from a smart doorbell, like 2-way talking, night vision and smart notifications. What sets the Google Nest Doorbell apart from the competition is the “premium” features that come with the device, free of charge.

Smart alerts, activity zones and video storage for up-to three hours don’t require a subscription with the Nest Doorbell. And these are features you usually have to subscribe for with other doorbells on the market.

It’s missing some features like 24/7 continuous recording, and it’s initial price is slightly more expensive than the competition, and there are some setup issues. However, the Google Nest Doorbell is a good smart doorbell that doesn’t require a monthly payment to get the most out of it, and that’s great.

The ease of setting up the Nest Doorbell will vary based on how your home Wi-Fi is set up. If you’re using Google Mesh, it’s a cinch, but for me, it was a frustrating experience.

My house has an irregular shape and my main Wi-Fi router is a fair distance from my front door. To remedy this I have third-party Wi-Fi extenders to cover the rest of my house. Trying to connect the Nest Doorbell to one of these extenders was complicated as by default, it would try to reconnect to my main router (which was out of range). There wasn’t an option during setup on the Google Home app to choose a different Wi-Fi signal.

In the end, I had to stand outside my house so the Doorbell could only pick up my extender’s signal. It was annoying, and took several attempts.

With that said, my circumstances are probably a bit niche. If you only have one router in your house, setting up the Nest Doorbell will be fine.

The Nest Doorbell is a great-looking smart doorbell. It’s simple and sleek design means it doesn’t stand out like a sore thumb and looks good beside any door.

It records in 1080p resolution and in a 3:4 aspect ratio. I liked the 3:4 ratio because it provided more vertical space. When someone came to my door I could see them from head to toe, even when they were close to the camera. With 16:9 doorbells I’ve used in the past, I wouldn’t be able to see the heads of people at my door. But, with that said, it’s a more narrow aspect ratio meaning It didn’t pick up as much horizontally as other doorbells.

The Google Nest Doorbell has a large button on it that alerts you when someone is at the door. Clicking on this alert will open the Google Home app where you can view the person live and two-way talk to them if required. It’s simple, intuitive and it works seamlessly.

The Google Nest Doorbell doesn’t do much to mix up the market. It has the same standard features you would find on most smart doorbells, 2-way talk, HD 1080p video recording, night vision and smart notifications.

There are smart doorbells that record in 4K however, 1080p resolution will be sufficient for most people.

The best part about Google’s Nest Doorbell is the “premium” features you get for free. A lot of smart doorbells like the Arlo Essential have these sorts of features locked behind, sometimes very expensive, subscription models. That’s not the case here.

The most useful of these features is smart alerts. Google has upgraded and improved the Nest Doorbell’s on-device AI to better recognise specific events. Through the Google Home app you can switch on smart alerts for people, animals, packages, vehicles and motion, it’s also able to notify you of a package left at your doorstep. In my 4-5 weeks using the doorbell, it never incorrectly notified me of a tree moving or a leaf blowing in the wind. It’s very accurate.

You get 3-hours of recorded history for free with the Nest Doorbell. This means that every event will be stored for up to 3-hours. In this time you can view the event and or download it in case you need to show it to authorities. This 3-hour limit is relatively short especially if the event happened when you were sleeping, however it’s free and that adds a lot of value when you consider the competition. To save and download any footage using an Arlo doorbell, you must  subscribe for $6/month.

The Nest Doorbell also allows you to set up activity zones without the need for a subscription. These zones let you define what you want the doorbell to alert you about in certain areas of the recording. For example you can draw an area around your driveway, to alert you about vehicles, while having another area alert you about packages or people on your doorstep. It’s easy to do in the Google Home app and it’s accurate as well.

For those who need 24/7 recording with their smart doorbell, this isn’t available with the Google Nest Doorbell. Even if it’s wired.

You can connect the Nest Doorbell to existing doorbell wires, but for this review, I used it with it’s internal battery and I quickly found out the battery life of the Google Nest Doorbell is very good.

Battery life will vary based on how much the Doorbell records. After using the Doorbell for 5 weeks with 5-6 events recorded per day, the Google Nest Doorbell was at 75% battery. It’s pretty good.

To charge the Nest Doorbell, you can pry it off it’s housing with a special tool included in the box and connect it via a USB-C cable. It took about 4 hours to charge to full.

Google’s Nest Doorbell is slightly more expensive than the competition, however you don’t need a subscription to get the most out of it.

Smart alerts, 3-hours worth of stored recording, activity zones and a 3:4 aspect ratio make this a smart doorbell that works well.

I did come across some setup issues and it doesn’t have 24/7 continuous recording options but this is a great smart doorbell that will do the job for no extra cost.

And if you need more from the doorbell, there’s always an option of a Nest Aware subscription that costs the same as other subscriptions out there.