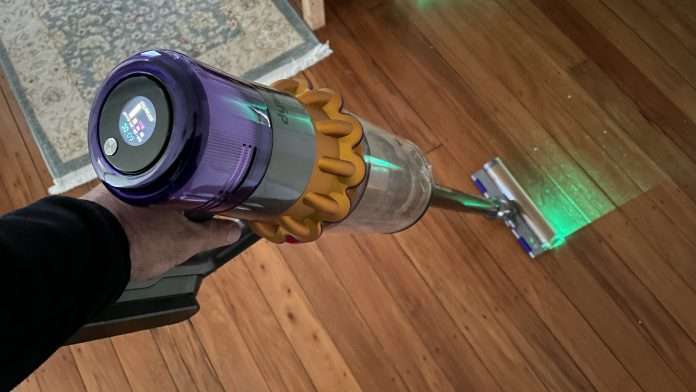 The Dyson V15 Detect Total Clean is a very good vacuum that comes with a high price.

It’s a powerful, incredibly easy-to-use, cordless, vacuum cleaner that will pickup anything you throw at it. You’ll want to use it all the time.

If you already have a Dyson V10, V11 or even, at a stretch, a V8, it’s not worth upgrading to the V15 – as the new model doesn’t bring many significant changes.

However, with that said, the V15’s anti-tangle hair screen and the laser cleaner heads are impressive and if you’re looking for a cordless vacuum that can do even the hardest jobs, you won’t be disappointed with Dyson’s V15.

The Dyson V15 Detect Total Clean is an expensive vacuum cleaner costing $1,500. It’s $500 more expensive than its predecessor, the V11.

The V15 maintains that familiar Dyson cordless design. It looks almost identical to the Dyson V11.

It has a clear 0.77L bin that, although on the smaller side, works well. You can see when it’s full, and it’s easy to empty. All you have to do is remove any accessories attached to the vacuum, point the nose of the cleaner into the bin, and push the red release button down. It’s great.

Most of the V15’s improvements are located on the inside. Dyson’s latest vacuum is more powerful than its V11 predecessor. The V15 generates 230 Air Watts of suction power while the V11 generates only 185.

This comes down to Dyson’s improvements in the Radial Cyclone technology inside the motor. The V11 utilises 14 concentric array cyclones that can generate 79,000g of force to fling dirt and dust into the bin. The V15’s 14 cyclones can generate up to 100,000g of force. Simply put, the V15 can accomplish a deeper clean.

The V15 comes with different heads that all have specific uses. I appreciated being able to use the heads that came with my V11 on the V15. However, the new heads that come with the V15 are not backward compatible.

The V15 comes with a Laser Slim fluffy cleaner head, (more on that below), an anti-tangle high torque cleaner (for any surface), an anti-tangle hair screen (for long hairs and pet hairs), a crevice tool (for hard to reach gaps), a dirt brush (for furniture), a soft brush (for delicate surfaces) and a combination tool that has a brush and wide nozzle that you can switch between. There’s a lot. And they all work well.

I found I didn’t use all of these heads and mainly stuck with the high torque cleaner. However, I did appreciate knowing I had a specialised head for different jobs.

On the top of the V15, there’s an LCD screen that shows you information about the vacuum. It tells you how much dust and dirt you’re picking up categorised by its size, and from here you can change between Eco, Auto, and Boost mode. It also shows you how much battery is left, and it will tell you when there’s a blockage or an issue. It works well.

Charging the V15 is also incredibly easy. The vacuum comes with a docking station that can be mounted on the wall and a charger. It’s simple to use and works as it should.

So what’s different about the V15?

The most obvious new feature that the V15 brings is the Laser Slim Fluffy cleaner head. This is new to the V15 range and is used for hard-floor cleaning.

This head contains a green laser diode that illuminates the surface and shows dust particles that you usually wouldn’t be able to see. In darker areas, it worked well. Almost too well, as it forced me to dedicated more time to vacuuming to suck up all the dust (that I previously couldn’t see). The laser struggles in well-lit rooms, though, and after the initial “wow” factor, I found that I didn’t use it much.

For a germaphobe, the laser diode is a blessing and a curse. It allows you to suck up dust you usually wouldn’t notice. However, it can turn you into a dust obsessed cleaner. You’ll start seeing dust everywhere, all the time, and you’ll want to clean it.

I never really had a use for this. However, for those who suffer from hayfever or intense allergies, it could come in handy. Without background knowledge, the graph is difficult to understand but after a simple Google search it’s easy to comprehend.

Generally speaking, the size of the particles reflects what it is you’re sucking up. Particles greater than 10 microns usually indicate allergens or pollen, 60 microns dust and skin, 180 microns sand, and 500 microns sugar.

Dyson claims this graph can inform you when you’ve performed a thorough, deep clean. “When lots of dust is being vacuumed, the graph rises quickly, but as less and less dust is picked up, it slows down, letting you know you’ve achieved a thorough deep clean.”

Annoyingly, the piezo sensor resets every time you pull the trigger. So if you do have a reason to interpret the graph, be sure not to accidentally pull the trigger because the stored data will be lost.

The V15’s battery is good. Dependent on use, the vacuum has a 60-minute run time. If you’re constantly using the vacuum in its most powerful “boost,” mode, then this time will decrease significantly.

It takes 4.5 hours to charge the vacuum from zero to full. If you have a big house or office, this disparity in battery life and charging time could be an issue. Fortunately, the battery in the V15 can be taken out, so you may want to think about buying an extra battery so you can interchange the two.

It’s also important to consider the V15 doesn’t come with a continuous feature. You have to hold down a trigger to keep the vacuum going. Dyson says this is to save battery. I didn’t have a problem with this, I found it easy to pull and hold, but this is definitely something to think about if you have weaker hands and especially if you have a large home.

There’s no denying that Dyson’s V15 is one of the best cordless vacuum cleaners on the market.

It has a significant amount of suction power, it comes with a number of specialised heads that are easy to alternate between, it’s simple to use and clean. It just works.

With that said, this is an expensive vacuum cleaner. The V15 is $500 more than its predecessor, the V11. And the new features it brings with it, the laser cleaner and the piezo sensor, feel like gimmicks as opposed to must-have features.

The V15 has a good battery, but you’ll want to purchase a second battery if you vacuum often. Which just adds to the already high cost.

If you already have a Dyson V10 or a V11, then it’s not worth upgrading to the V15. However, if you’re looking for a good cordless vacuum cleaner, the V15 is one of the best you can get, and you’ll never stop using it. 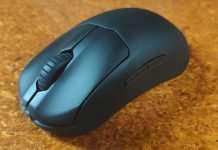