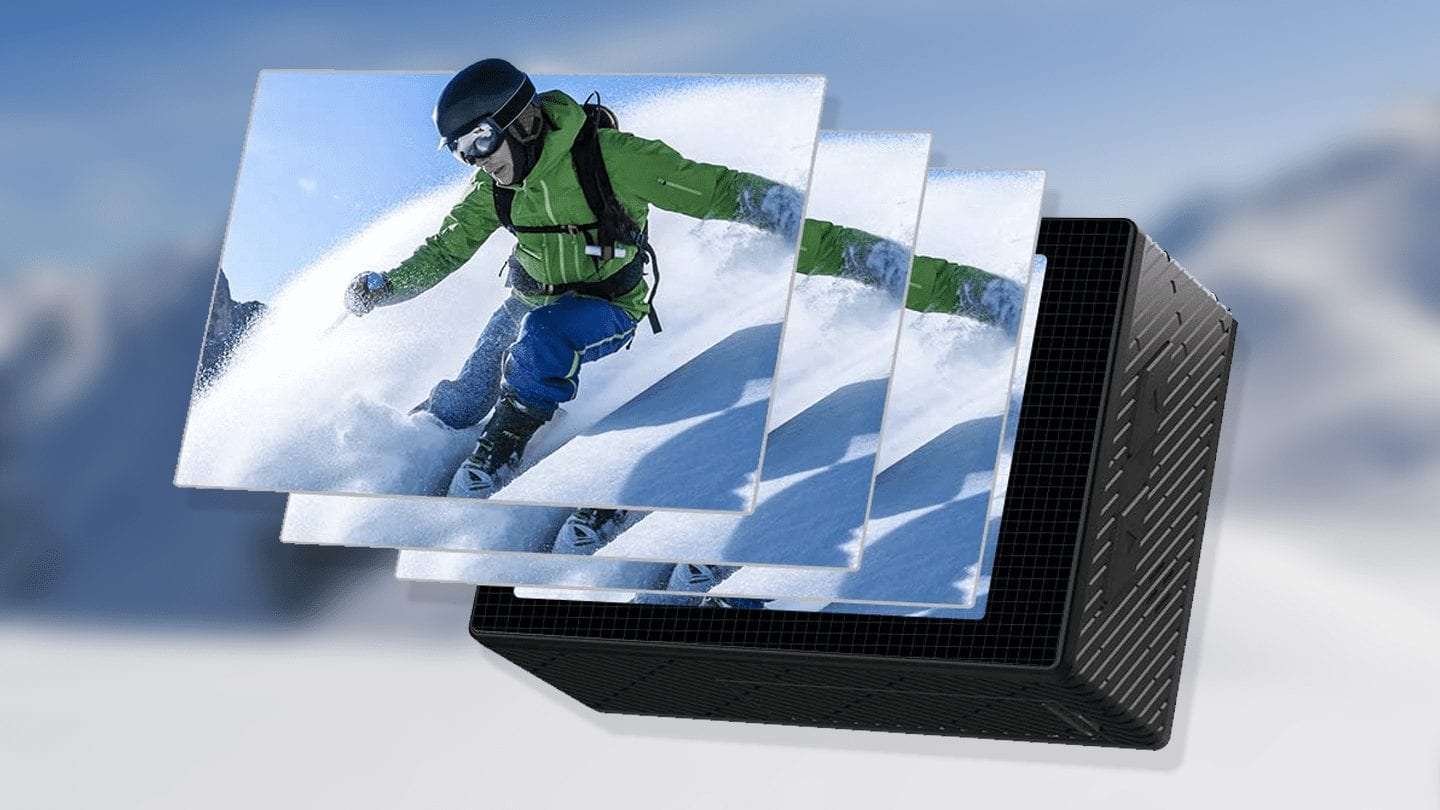 GoPro is undoubtedly one of the biggest names in action cameras, but its gadgets don’t come cheap. Luckily, the rise of the action camera has seen other companies release their own alternatives for cheaper. We’ve got the details on the best GoPro alternatives.

If you’re an adrenaline junkie that wants to record some POV shots, you can’t get the job done without a durable action camera. We’ve spotted some great options from Crosstour, Apeman, Akaso and other brands. Gone are the days when you had to spend three digits to get your hands on an action camera.

In our guide on the best GoPro alternatives, we’ve rounded up some popular cheap action cameras under £50.

What is an action camera? 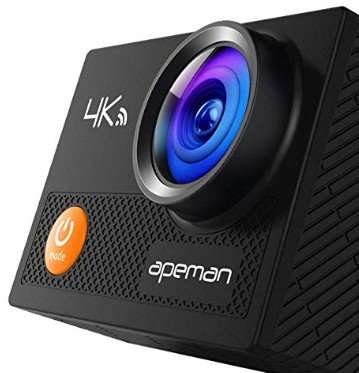 An action camera is a durable, portable camera that’s specifically designed to capture footage at high speeds or in challenging environments. The majority of action cam owners use their cameras to record POV shots of sports activities.

The action camera craze began when GoPro launched its first product back in September 2004. Since then, hundreds of different brands have taken on the challenge of creating sturdy action cams capable of filming in 4K.

As they’re designed to tackle the elements, action cameras will often come bundled with protective cases. In some instances, these cases make the cameras waterproof, meaning you can take them swimming. When it comes to buying an action camera, you’ll want to consider exactly what you plan on using it for so you can pick the perfect model for you.

How much do action cameras cost?

High-end action cameras from GoPro can sell for over £400, but you definitely don’t need to spend that much to get a camera that films in 4K. GoPro alternatives are cheaper than ever before, which is great news if you’re on the market for an action camera.

Most of the action cameras on Amazon are on offer at under £100. Even at that price point, you’ll find 4K models that come bundled with mounting accessories and protective cases.

Important action camera features to look out for

Before you start building your shortlist, you’ll want to have a good idea of the key action camera features to look out for. After all, features make the difference between a mediocre action cam and a fantastic one. Before you part with your hard-earned money, consider the following: 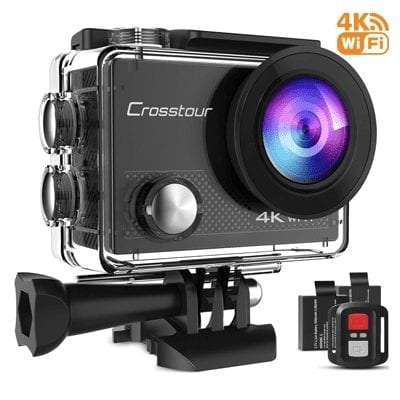 Depending on what you’re filming with the Crosstour action camera, you might not have time to manually press the ‘record’ button. Luckily, this popular GoPro alternative has built-in hands-free control – it comes with a remote that lets you film videos and take pictures at any time.

The Crosstour Action Camera comes bundled with a case that keeps it protected against the elements – that’s great news if you’re filming on rocky terrain. The case is made from IP68-rated material, meaning this GoPro alternative will survive in up to 30m of water. If you’re looking for an action camera to partner up with on your next scuba dive, this should be a contender.

As this action cam has built-in WiFi, you can download the iSmart DV smartphone app for a live view of what the action cam is seeing. According to Crosstour, the WiFi signal can reach ‘up to 10 metres’. From the app, you’ll also be able to tweak resolution settings, play and pause recordings and share your favourite clips via social media 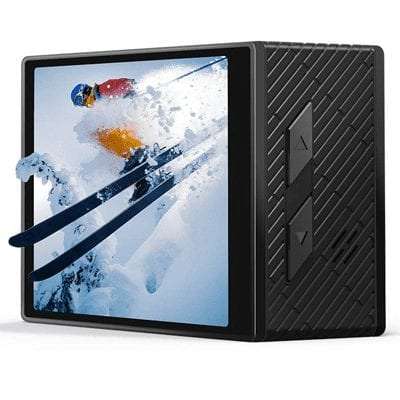 Here’s another affordable 4K action camera to look at. The Apeman Action Camera captures 4K clips (at 30fps) and takes 16Mp still images. It runs off a 1,050mAh battery.

A handy anti-shake feature will prevent your shots from looking too blurry, ideal if you’re planning on filming at high speeds. In other words, this GoPro alternative is great for skiers and mountain bikers wanting to keep costs low.

The Apeman Action Camera has a 2-inch display and a 170-degree wide-angle lens. Like the Crosstour action camera above, this model boasts built-in WiFi support. You can download the partner app on your smartphone or tablet to share your best moments on social media in seconds. The app also lets you control the camera remotely in case your hands are full or the camera is attached to your helmet.

Various shooting modes on the Apeman Action Camera will help you get creative. There’s a time-lapse mode for arty sunset shots, along with a burst photo option that’ll help you get a great shot if you’re trying to capture something moving at high speeds.

If you buy the Apeman Action Camera today, you’ll also get an IP68-rated waterproof case. According to the manufacturer, you’ll be able to take this action camera up to 30 metres underwater. The bundled mounting kit will let you attach this cheap GoPro alternative to your clothes or vehicle. 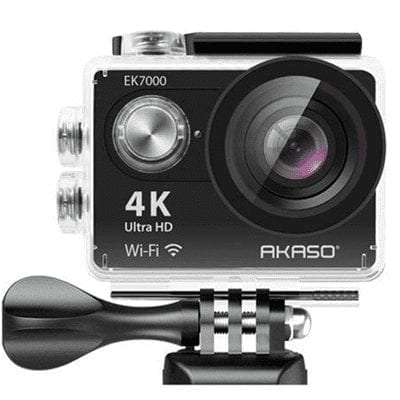 While prices for a brand new GoPro action camera can zoom beyond £100, this Akaso camera is just £50 over on Amazon. It films in 4K (at 25fps) and 2.7K (at 30fps) and takes still images at 12Mp. Bundled with a remote control that wraps safely around your wrist, you’ll have no troubles framing your shots or recording video.

The Akaso EK7000 comes with a pair of rechargeable 1,050mAh batteries and a dual battery charger. Each battery can record ‘up to 90 minutes’ of footage, which should be more than enough for an exciting day out and about. With built-in WiFi, you’ll be able to share your footage in minutes through the iSmart DV smartphone app.

Designed for sporty types, you can take the Akaso EK7000 snorkelling, swimming, surfing, cycling, skateboarding and hiking. Its durable design will tackle whatever you’re putting it through. Once the day’s over, you can review your footage on the 2-inch LCD screen. Saving and deleting clips on this GoPro alternative is a breeze.

In the box, you get the action camera, a remote control, two batteries, a USB battery charger, a waterproof case, a bike stand, 7 mounts and a lens cloth. Click our buying link and order yours today. 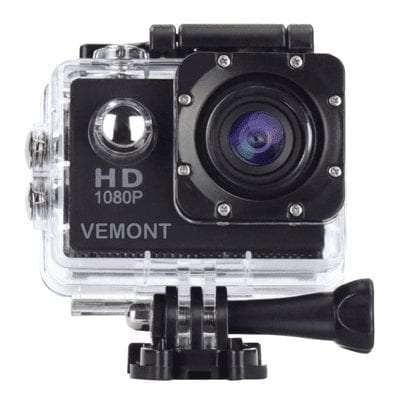 This is the cheapest action camera in our roundup, so what can you expect from the Vemont at a tempting £19?

The Venmont Action Camera shoots at 1080p video and takes 12Mp still images. It uses a 140-degree wide-angle lens to capture everything that’s happening in front of you, whether you’re riding your bike down the road or surfing waves. It doesn’t film in crystal-clear 4K, but that shouldn’t come as a surprise considering the price tag.

Like many affordable action cameras, the Vemont comes bundled with an IP68-rated waterproof case. You’ll be able to film underwater up to 30 metres, with mounting accessories making it easy to keep the camera in place as you swim around.

This camera uses a 900mAh rechargeable battery that’s easy to swap out at any time. If you have a bigger budget, you might be tempted by a GoPro alternative that has a larger battery. 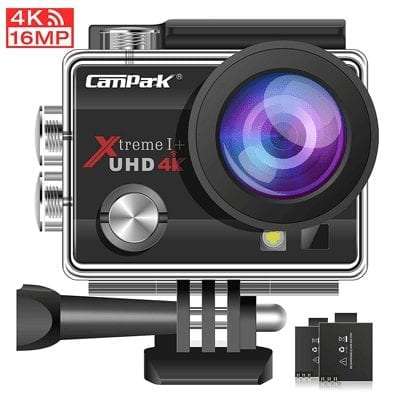 This cheap action camera from Campark films in 4K and captures 16Mp still images with its 170-degree wide-angle lens. It uses a Sony sensor to deliver crisp footage, helping you capture memorable moments and share them with the world.

You’ll be able to look back at your clips on the Campark ACT74’s 2-inch HD screen. Out of the box, you’ll have 32GB of storage space to play around with. If you download the smartphone app, you can transfer your clips and upload them online.

The Campark ACT74 Action Camera is another example of a waterproof GoPro alternative. The brand’s website says you’ll get ‘up to 180 minutes’ from the action camera’s dual rechargeable lithium batteries. Charging the batteries from empty to full will take ‘about 2 to 3 hours’.

Uniquely, the Campark has an attention-grabbing slow-motion mode. You’ll be able to get some beautifully cinematic shots with this feature, which is perfect if you’re exploring some stunning environments around the world.