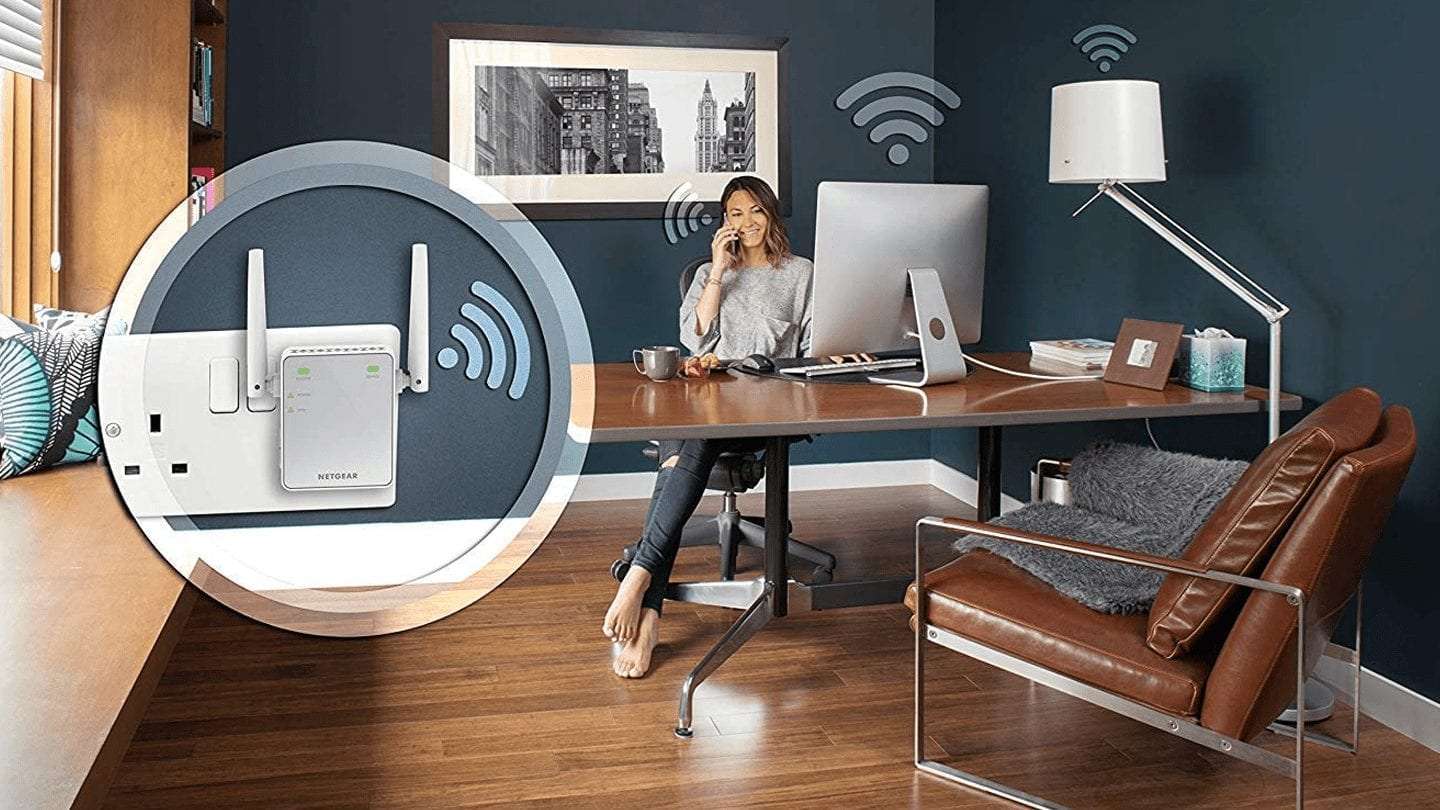 If you’re struggling with a weak internet connection at home, investing in a Wi-Fi extender could save the day. These small gadgets communicate with your router so you can walk around the house without losing signal on your phone or PC.

The best Wi-Fi extenders to buy in 2019 aren’t tricky to install and configure. In fact, we’ve rounded up some options that you can have up and running in under five minutes. We’ve spotted top Wi-Fi extenders from big-name brands including Devolo, Netgear and TP-Link.

Keep scrolling for a selection of Wi-Fi extenders that are easy to install. Prices start at around £17.

See also: Best Wireless HDMI: How to send TV signal to another room

What is a Wi-Fi Extender or Wi-Fi booster?

As the name suggests, Wi-Fi extenders are designed to extend the coverage area of your Wi-Fi network. They’ll come in handy if you want an internet connection in a home office or living room that’s positioned a fair bit away from your primary router.

Wi-Fi extenders are fairly cheap, which means you might end up buying more than one. If you end up grabbing a pack of Wi-Fi extenders, you’ll be able to link them together wirelessly so they all run off the same home network with the same password.

How does a Wi-Fi Extender work?

Once it’s plugged into the wall, a Wi-Fi extender will pick up on the signal from your internet router. It takes that signal, amplifies it and transmits it from a new source. Depending on your setup, you can essentially double the area of internet coverage in your home using Wi-Fi extenders.

An extender won’t increase the speeds you get from your router, but it will make that connection more accessible.

Depending on the layout of your house, you could use Wi-Fi extenders to transmit an internet signal to different floors. It’s important to note that a Wi-Fi extender won’t increase the speeds you get from your router, but it will make that connection more accessible around the house.

Some plug-in Wi-Fi extenders will have an Ethernet port on their underside. You can run an Ethernet cord from your router into the extender for the best signal. Alternatively, you can try a completely wireless connection with the Wi-Fi extender.

Where to put a Wi-Fi Extender?

You’ll need to position your Wi-Fi extender in a spot where it can pick up on the signal from your router. If the wi-fi extender is too isolated, it won’t receive the signal and can’t broadcast a Wi-Fi hotspot for you to connect to.

Feel free to experiment by placing the plug-in Wi-Fi extender in different parts of the house. If the signal has to travel from your router through some walls to reach the extender, don’t be surprised if you only get a weak connection.

You may notice an increase in latency for each additional Wi-Fi extender you add to your home network. 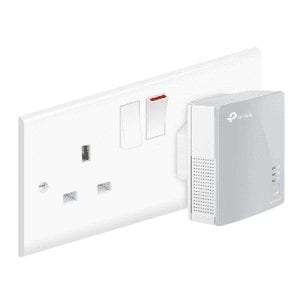 Buy this Wi-Fi extender from TP-Link and you won’t have to suffer through a fiddly set-up process. Actually, it’s remarkably easy to install.

As this extender is ‘plug and play’, you just run a cable from your router into the bottom of the TP-Link. Once that’s done, you can connect to the Wi-Fi extender from areas where you’d usually struggle for an internet connection. If you buy a second TP-Link extender, you can have that one link to the original extender that’s connected to your router.

TP-Link says that this Wi-Fi extender uses power-saving technology to conserve “up to 85% energy” when not in use. It’ll allow you to expand your home network without having to trail wires all over the house.

You can connect to the TP-Link Wi-Fi extender from your smartphone, PC or games console. The box itself is fairly small and doesn’t take up much space once it’s plugged in.

Verdict: An easy-to-use ‘plug and play’ extender that won’t hit your wallet too hard. TP-Link Wi-Fi extenders are both reliable and effective – there’s a reason why so many people use them. 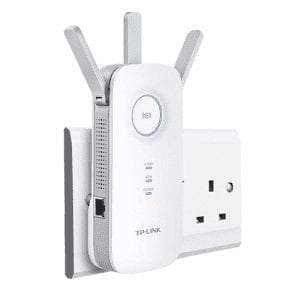 Here’s another Wi-Fi extender from TP-Link worth taking a look at. This model delivers high-speed, dual-band Wi-Fi “up to 450 Mbps on 2.4 GHz” and “up to 1,300 Mbps on 5GHz”. It uses three dual-band antennas to guarantee a strong wi-fi signal from wherever it’s sat.

A WPS (Wi-Fi Protected Setup) button on this extender makes it easy to use for the first time. Press the WPS button on your home router and then do the same on the TP-Link. With both devices searching for a signal, they’ll find each other and form a connection. Once that’s sorted, you can connect to the extender with the same password your router takes.

According to TP-Link, the AC1750 can extend Wi-Fi “up to 10,000 sq ft” to deliver a strong signal. LEDs on the front of the extender will tell you about the strength of the signal it’s receiving. A blue light means everything is hunky-dory, whereas a red light means you should try plugging the extender in somewhere else. Ideally, that’ll be somewhere closer to your router.

You can download the free TP-Link Tether app to configure your home network from your smartphone. The app works with both iOS and Android mobiles.

Verdict: A safe bet if you’re after high-speed Wi-Fi throughout your house. 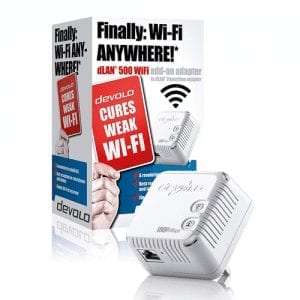 This Devolo Wi-Fi extender can broadcast speeds quick enough for online gaming. Plug it into your wall and you’ll instantly have yourself a new Wi-Fi access point, provided the extender is close enough to your router.

You’ll get speeds of up to 500 Mbps from this Wi-Fi extender, according to Devolo. In theory, that means it’ll cope well if you’re streaming video content from a Smart TV. The latest Netflix series or BBC iPlayer shows, for example.

We appreciate the subtle design of the cube-shaped dLAN 500 extender. It’s one of the smallest Wi-Fi extenders you can buy and shouldn’t take up much room in the wall. The green lights on the front blink every so often, but it’s not much of a distraction.

You’ll spot some buttons on the front face of the extender – they’re used to pair the dLAN 500. Once configured, you don’t need to worry about them again.

Verdict: A mini but mighty Wi-Fi extender that you can buy in a 1-pack, 2-pack or 3-pack. 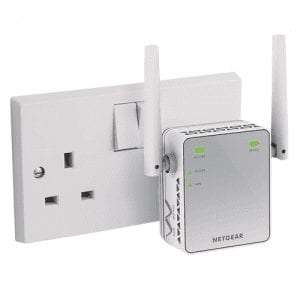 Netgear is a major player in the world of Wi-Fi extenders. The brand sells lots of different extenders and this is one of its cheapest. The Netgear EX2700 serves up speeds “up to 300 Mbps” and runs from a standard UK plug socket. It has a pair of silver antennas that boost your signal.

This extender will work with any Wi-Fi router and partners up with a free Analytics smartphone app. From the app, you can check network status and the strength of your signal. It will also help you spot crowded Wi-Fi channels.

Some LEDs on the front of this Netgear extender give you an overview of your network. At a glance, you can see if your router is broadcasting a signal and whether or not the extender is picking it up. There’s a single Ethernet port on the underside of the Netgear Wi-Fi extender.

To get this extender online, you just plug it into the wall. After that, you pair it using the WPS buttons on your router and the extender itself. If the router icon on the extender is red, you need to move the Netgear extender closer to your router.

Verdict: One of the cheapest Wi-Fi extenders around. But despite a low price tag, this Netgear model will still do a great job of boosting your signal. 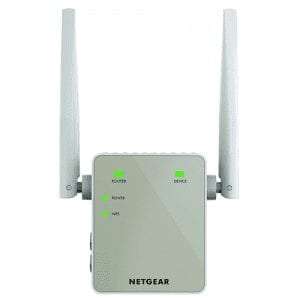 Design-wise, this Netgear Wi-Fi extender looks exactly like its sibling above. The only difference here is that this extender supports improved speeds “up to 1,200 Mbps”. A jump in performance means a jump in price, but you’ll still get good value for money.

Netgear says that the speeds supported by the EX6120 make it well-suited for HD video, streaming and gaming. Once configured, you’ll be able to connect to the Netgear Wi-Fi extender from your TV, smartphone, tablet or games console.

If you download the Netgear Wi-Fi analytics app, you’ll be presented with an overview of your home network. Check your network status, signal strength and more with just a single tap.

Verdict: A high-speed Wi-Fi extender from Netgear that you’ll want to look at if you’re into HD streaming and gaming.

Read next: How to watch Sky Atlantic outside of the UK