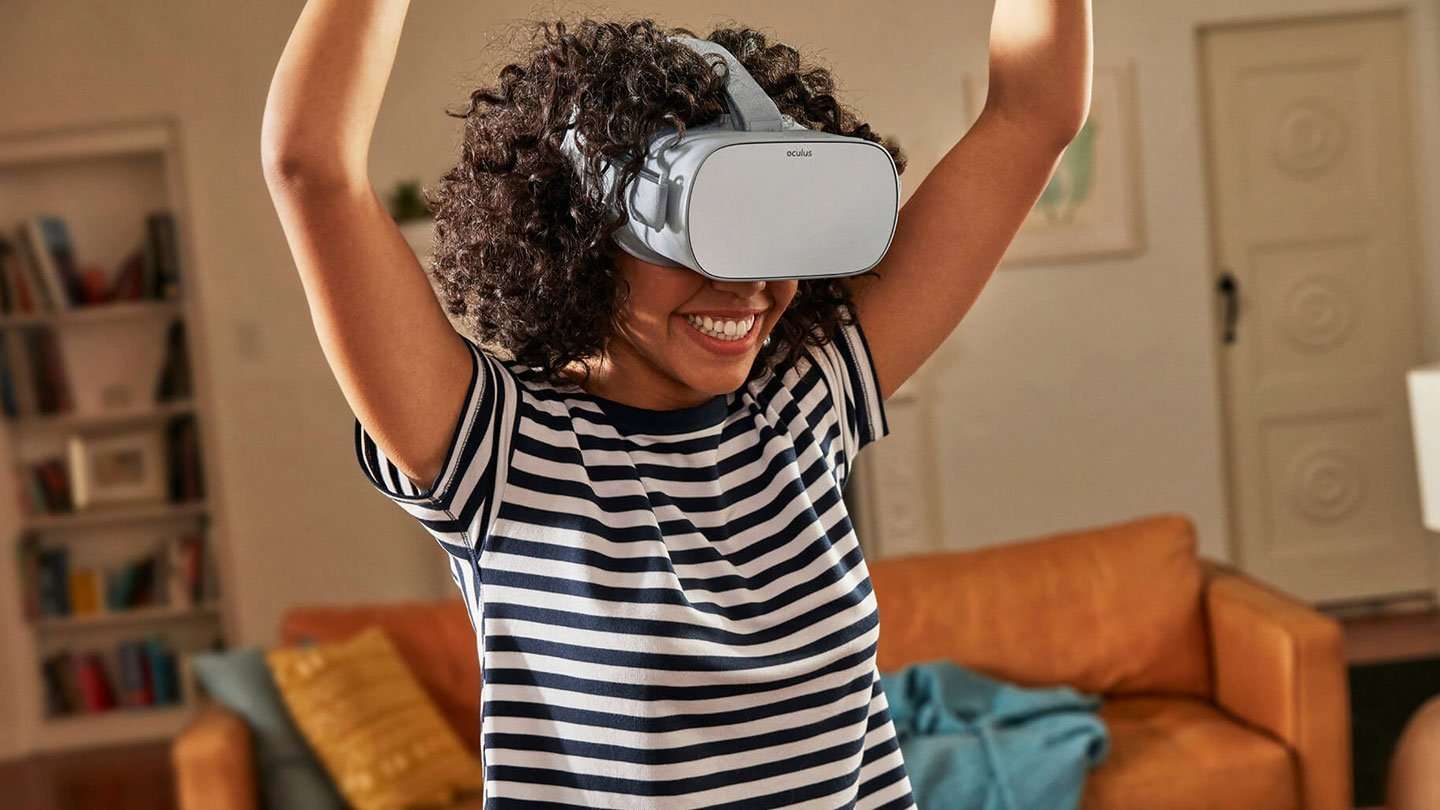 With a cheap VR headset, you can experience unique, immersive games that transport you to other worlds. Our expert guide uncovers the very best cheap VR headsets for iPhone and Android.

There are loads of smartphone VR headsets to choose from, and before you know it you’ll be exploring the Amazon jungle or soaring above the clouds in a paraglider. We’ve got the details on VR headsets for iPhone, VR headsets for Android and premium alternatives from Oculus and PlayStation.

See also – The best gaming headsets for under £100

What is VR or virtual reality?

Virtual reality, otherwise known as VR for short, can transport you into a virtual world. When you wear a VR headset, moving your head around will let you look around a virtual 3D space in real time.

There are thousands of free and paid-for VR apps ready to be discovered, so get going!

The best smartphone VR headsets at a glance

How much does a VR headset cost?

It depends on what type of headset you go for. But you can pick up basic, cheap VR headsets for under £30.

If you’re working with a bigger budget, you might want something that feels more premium. Some headsets have their own built-in screen, so you don’t need your mobile on you to use them. The Oculus Go (£200) is a good example. The most wallet-busting option is a VR headset for PC. Big names in PC VR include the Oculus Rift S (£399) and HTC Vive (£500).

What phone is best for VR?

Generally, the newer your smartphone, the better your experience when using it for VR. Virtual reality apps need plenty of processing power to run lag-free, so flagship smartphones from big-name brands are a good fit. On the other hand, you might struggle to get a fluid experience from an older mobile with an aging processor.

Do you need a phone for VR?

Not always. While cheap VR headsets tend to rely on the display of your smartphone, pricier alternatives have their own built-in displays. This means no more worrying about charging your iPhone or Android smartphone before you load up a game.

Buying a VR headset – features to look out for

The best VR games and apps for iPhone and Android

You’ll have no trouble finding free VR games on Apple’s App Store or the Google Play Store – there are thousands. To save you some time, we’ve sifted through the latest games and picked out some gems. These are some of the best free VR games for iPhone and Android:

Roller Coaster VR attraction – Take a ride on a massive rollercoaster as it dips and dives through giant loops, tight turns and jungle ruins.

VR Space Stalker – This free VR game will have you flying a spaceship through mysterious vaults and ancient tombs. A must for sci-fi geeks.

Froggy VR – Help a froggy find his lost friend and eat all the flies you want along the way. A great free VR game for kids.

Got your VR games installed on your mobile? The last piece of the puzzle is a top-notch VR headset. Have a look at the best cheap VR headsets below.

The best cheap VR headsets to buy in 2019 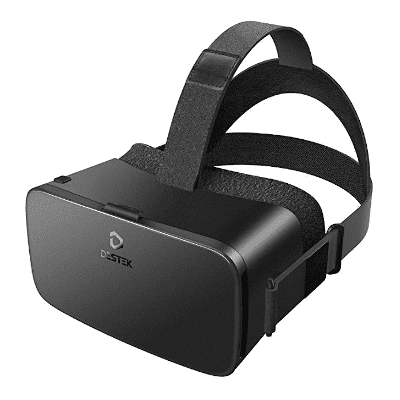 This headset might catch your eye if you’re looking for a cheap way to experience VR for the first time. A wide field of view guarantees an immersive experience, while the lightweight design keeps things comfortable.

Even if you usually wear glasses, you’ll still be able to game with the DESTEK VR headset. The brand also says the pupil distance button will help you make scenes clearer as they play out in front of you. Anti-reflective lenses on this budget-priced VR headset reduce eye strain.

To prevent the headset from wobbling around while you’re jumping around the room, DESTEK has added an adjustable head strap.

This top pick has a removable, washable facepad made of ultra-soft, breathable fabric. It supports iOS and Android smartphones with screens as large as 6.5 inches.

Verdict: a great option for VR newbies looking to experience VR for the first time. Cheap, easy to use and secure with a handy head strap. 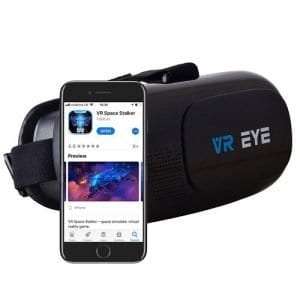 A sub-£10 price tag makes this simple VR headset a great, inexpensive gift for yourself or a loved one. Originally on sale at £20, you can grab it now for just £6.99.

The Bitmore VR headset plays nicely with screens as big as 6.5-inches. It has two fully adjustable lenses, and sliders on the top let you tweak your view until you’re happy.

There’s a small hole in the right side of the Bitmore which lets you feed a charging cable through.

You’ll see a strap attached to this VR headset. It goes around the back of your head, but not over the top.

Verdict: One of the cheapest VR headsets around. Despite its low price tag, it still does the job if you want to experience VR on your smartphone. 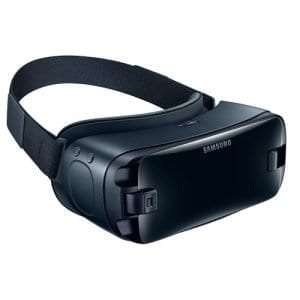 This VR headset is slightly pricier than most of our other picks, but grab the Gear VR and you’ll notice the superb build quality right away.

The padding around the eye sockets is nice and soft, so you won’t have any problems if you end up watching VR films for long periods at a time.

As this VR headset is powered by Oculus tech, the accuracy of its head-tracking is fantastic. It’s a clear step above most VR headsets for smartphones. The partnership with Oculus also means you’ll have access to the Oculus VR app, which has hundreds of games and interactive films.

There’s a brilliantly useful trackpad on the right side of the Samsung Gear VR – you use it to move your cursor. Sat right above the trackpad are a ‘Home’ button and a ‘Back’ button.

Unsurprisingly, the Gear VR is compatible with loads of Samsung mobiles. The full list includes the Samsung Galaxy Note 9, Note 8, S8 and S8+.

Verdict: The perfect pick if you own a Samsung smartphone and don’t mind spending around £100. 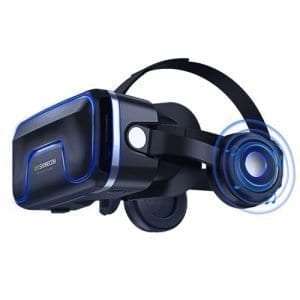 This unique VR headset has a pair of adjustable headphones attached to it. It has a striking blue design, and its makers say that the materials used will help to prevent your phone from overheating.

On the top of this cheap VR headset are buttons that let you interact with your favourite apps. You can also use them to adjust volume with a quick press.

To use your phone with this headset, you remove the buckle at the top of and fold the plate down. Prop your smartphone against that surface, fold it back up and put the glasses up to your eyes. That’s all there is to it.

Verdict: The VR headset for you if you enjoy wearing headphones while you game. 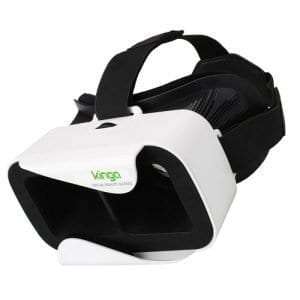 This lightweight VR headset is really easy to use. Although it doesn’t have any built-in volume controls, you do get a dial for playing around with pupil distance.

There’s also a clip on the front of the headset to stop your mobile from dancing around while you’re blasting aliens or flying a spaceship in-game.

The faceplate is made from soft leather and a secure strap wraps around the top and back of your head.

Verdict: If you’re curious about VR and want something super simple, this cheap VR headset is a safe bet for a tenner.

If you’ve got a bigger budget, try: 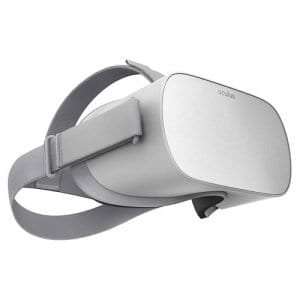 This is a standalone VR headset for iOS and Android. In other words, it runs mobile games, but has its own built-in screen.

You’ll need to download the free Oculus app on your mobile to configure the Oculus Go VR headset for the first time, but after that you’re free to play without your phone.

There’s 32GB of storage space on the Oculus Go, which means you’re able to browse the app store while wearing the headset and download new games straight to it without fuss.

The VR headset comes bundled with a nifty handheld controller that you can use to point at objects while you’re wearing it.

Verdict: We love the Oculus Go. Brilliant value for money if you have more than a passing interest in VR. The fact you don’t need to have your smartphone sat inside the headset is a welcome bonus.

Read next: The best gaming keyboards under £100