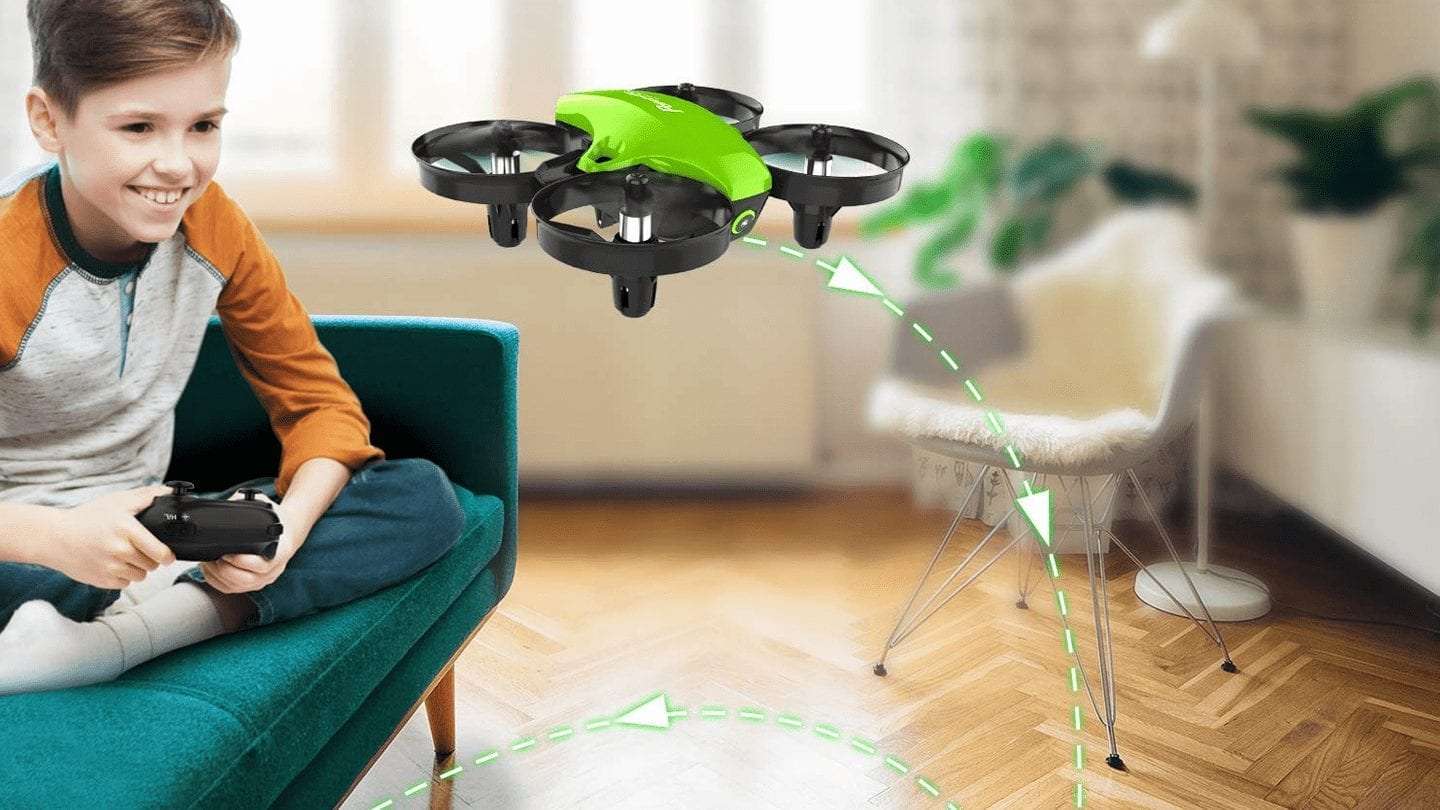 Piloting a drone is brilliant fun, however old you are. Nothing beats seeing your aircraft dive through the sky as you weave through obstacles using your remote control. If you’re researching drones for kids, you’ll be pleased to hear that you don’t need to spend masses to get a great toy.

Over on Amazon, there are hundreds of cheap drones for kids to choose from. While some of them are controlled using a traditional remote, others will dance around your living room on their own using clever air pressure sensors.

In our guide on the best drones for kids, we run through the need-to-knows on safety and highlight five popular models we like the look of.

What is a drone?

A drone is essentially a remote-controlled aircraft.

Expensive drones with camera attachments are aimed at video makers and sporty types, while drones for kids are cheaper, lighter and easier to pilot. If you’re buying a drone aimed at a younger pilot, it might have some colourful LEDs and sound effects to enjoy.

Most drones feature four propellers that help them keep balanced as they hover in the air. Think of a drone as a flying robot – you can control the direction it flies in and try some flips if you’re feeling confident.

Are drones safe for kids?

If you’re sensible, yes. As drones use spinning blades to remain airborne, it’s obviously a good idea to supervise a child while they’re flying. Most manufacturers recommend a minimum age of 10 years old.

Before flying your drone, remember to:

Whatever drone you end up buying, you’ll want to read the manual to make sure it’s child-friendly. Drones aimed at children will often have features such as softer blades, secure battery compartments and slower flying speeds. They’re generally better at surviving bumps and scrapes, too.

How much does a drone cost?

‘Proper’ drones can cost thousands of pounds – they’re designed to stay in the air for longer periods of time and use cameras to capture 4k footage.

The priciest drones come courtesy of well-known brands such as DJI, GoPro and Parrot. One of DJI’s most popular models this year is the DJI Mavic Air, which costs close to £900 on Amazon. That price tag is justified by a 4K camera capable of shooting stunning panoramic photos.

‘Proper’ drones can cost thousands of pounds, but most drones for kids will cost you less than £50.

Typically, the more you spend on a drone, the longer it’ll last on a single charge. If you’re not too bothered about having to charge a drone on a regular basis, you won’t be spending much money at all. Most drones for kids will cost you less than £50, which makes them a good fit for a Birthday present or Christmas gift.

Best drones for kids under £50

This cheap drone for kids has three adjustable flight speeds – you can start flying at slow speeds and then crank it up when you’re feeling more confident. It comes with a remote control.

Potensic promises this affordable drone is easy to fly, making it a good pick for first-time pilots. It uses Altitude Hold mode to keep the drone hovering at a specific height. In other words, if you’re distracted and look away from the drone, it’s not going to dive to the ground and smash into pieces.

The lightweight A20 Mini Drone uses a secured battery slot protected by insulation plastic. You can also lock in the height of the drone and just use the remote to move the aircraft forwards and backwards. If the drone is about to leave the flight range of the remote control, you’ll hear a loud beep. You’ll need to turn the drone around and return to base.

A one-button take-off system has you up and running in seconds. Press the button on the remote and the drone will fly up and hover automatically. The same button will help you land the A20 Mini Drone when playtime is over. When the drone battery is low, the remote control will let you know. 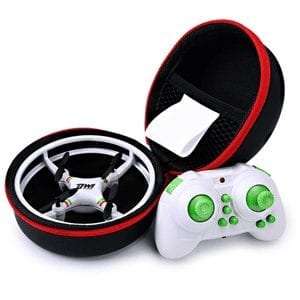 This toy uses a robust shell to protect it when you accidentally bump into things while you’re learning to fly. It’s great for beginners and comes with its own little carry pouch.

Pick up this drone from Amazon and you’ll also get the transport case, charger, remote control, replacement propellers, batteries and a screwdriver.

You recharge this drone using a USB cable. It’ll take roughly half an hour to reach a full battery, which gives you around 5-8 minutes of playtime. The remote control will let you pilot the drone from up to 100m.

The built-in battery uses a protection board to automatically shut off the drone in the event of a collision. 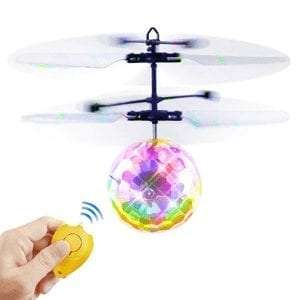 This mini drone can keep your little one entertained with its sparkling globe and colourful lights. It’s built from friendly, non-toxic materials and uses a built-in rechargeable battery.

The Betheaces Flying Ball is made for beginners. It’s easy to fly and uses blades that aren’t easily deformed – they’ll survive the odd bump into the living room sofa. The colourful LED lights also make the flying ball look great at night, with the patterns projected onto your walls.

Uniquely, this toy is controlled using just your hand. You launch the flying ball into the air and then hold your hand underneath it to keep it floating around. Your challenge is to keep the toy in the air as long as you can. The drone will fly away from your hand when you try to grab it.

Two sets of blades and two balance beams help to keep the flying ball moving steadily. The motion sensors on the underside of the toy control the power of the rotors. 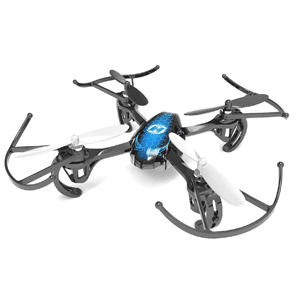 You’ll get between 30-50 minutes of flight time with this affordable drone. It uses a ‘headless security system’ to make flying easier – this stops the drone from flying in the wrong direction because of orientation problems.

Kids will love flipping this drone around. It uses 6-axis gyro technology to allow for cool, 360-degree air rolls at the touch of a button. It’s easy to handle even if you’re a beginner thanks to a sturdy, wind-resistant shell.

You have three different speed settings to play around with, so you can pick between beginner, intermediate and advanced. Colourful LED lights surrounding this fun drone will help you identify the front and back of the toy while you’re playing pilot. It also looks brilliant at night.

Buy this drone today and you’ll get plenty of goodies in the box. Aside from the quadcopter itself, you get a handy remote control, batteries, four additional blades, a charging cable, a screwdriver and a manual. You’ll have everything you need to get you up in the air. 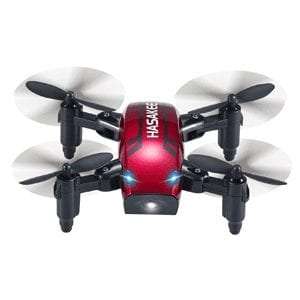 The H6 drone uses an air pressure sensor that lets it automatically set its own height. This system makes it easy to control, especially for kids. There are also dedicated buttons for taking off and flipping.

Three buttons for speed on the H6 drone let you start slow and then increase flying speed when you’re feeling more confident. The emergency stop function will help you regain control if the drone gets rebellious. Meanwhile, the Return function will have the quadcopter fly back to its takeoff position.

According to the manufacturer, you’ll get around 10 minutes of flying time from this drone. It charges from empty back to full in “about 35 minutes”.

If you’re looking for a cheap drone for kids, this is definitely a contender. It’s backed by hundreds of positive reviews over on Amazon.

Read next: The 5 BEST Fitness Trackers under £50