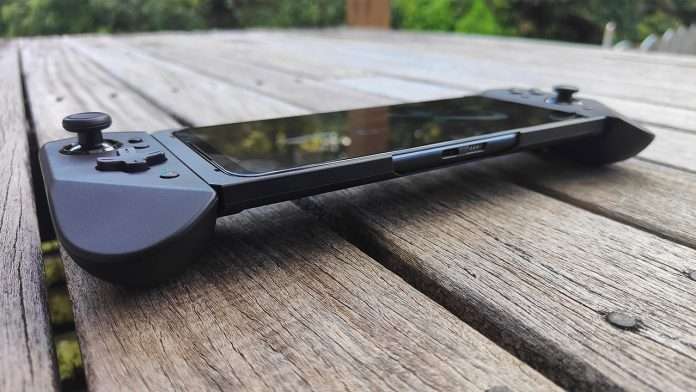 If you have a ROG phone, and are a phone gaming enthusiast, the ROG Kunai 3 Gamepad is a great controller. However, if you have a different device or are a casual phone gamer, it probably isn’t for you.

Yes, it’s compatible with multiple devices via Bluetooth, but its most useful configuration, handheld mode, is only available for ROG phones that can fit into its case.

The Kunai 3 is a comfortable controller with responsive inputs that makes gaming on a device more enjoyable. But it’s invasive. It’s big, has many parts, and becomes a nuisance if you do most of your gaming on a short commute.

The Kunai 3 Gamepads design works well. It has all the buttons you need, they’re responsive, and it’s shaped in a way that feels natural and comfortable.

It’s obvious that the Kunai 3 was inspired by the Nintendo Switch Joy-Cons. The left controller houses a d-pad and a joystick, and the right controller has an additional joystick and a four-button cluster. It’s fine.

Both controllers have two bumper buttons on the top, and there are also “Rear Control Keys” on the back that are easily accessed. It’s spaced out nicely. The bumpers and cluster buttons are small, but I never found I accidentally pressed the wrong input. It works well.

It’s also comfortable to hold. The controllers are light and long. I was able to get a firm grasp of the controllers allowing me to support my ROG Phone 5’s weight when gaming. It feels natural.

You can use the controller in two modes. However, I only ever needed the handheld mode. Like the Nintendo Switch, the Kunai 3 allows you to slide the controllers on either side of the phone using a special case. This process is simple and easy to do. However you will need either a ROG Phone 3 or a ROG Phone 5 for this to work. (The case is only compatible with ROG Phones)

You can also use the Kunai 3 like a standard wireless controller via Bluetooth. Taking the controllers off the sides of the phone, you can connect them together via a portable charging port (the middle connecting bit) to make a single controller.

I never really needed this as I was using a ROG Phone 5 and had access to the much better “handheld” mode. However, this is the only way you can connect the controller to non-ROG devices. And while this is a negative for those without a ROG phone, it worked well with my Oppo Find X3 Pro.

The Kunai 3 also comes with the Kunai 3 Grip, a plastic addon that makes the controller easier to hold. It felt unnecessary, and I never needed it.

The ROG Kunai 3 Gamepad is designed for hardcore phone gamers. When gaming for extended periods (in an airport or at home) it works well. Really well. However, if you’re like me and your phone gaming is mainly done on a short commute, then the Kunai 3 can be a bit of a drag.

If you don’t have a ROG Phone, gaming on a short commute with the Kunai 3 isn’t great. The controller’s wireless mode only works if you have a fold-down tray in front of you where you can prop up your phone. For most people, unless you’re flying, you won’t have one of these and it’s tedious to use when on the go.

ROG Phone owners can attach the Kunai 3 controllers to the sides of their device in “handheld” mode. This is clearly what the Kunai 3 Gamepad was designed for. However, it’s let down by the size of the case. It takes away some ability to use the ROG Phone 5 as a phone. I had to constantly switch out my protective case for my controller case at the start and ends of my commute. It became frustrating, and I didn’t bother to take the Kunai 3 Gamepad with me after a while.

Yes, the controller makes it easier to play games, but my ROG Phone 5 already has great built-in controls like its “Ultrasonic Sensors”. If you’re constantly going to be taking the controller on and off your phone, then the Kunai 3 Gamepad becomes more of a nuisance rather than a snappy alternative for controlling your games.

There’s a long list of compatible games with the Kunai 3 and playing shooters like COD Mobile is a more enjoyable experience than without it.

The controller is significantly better when paired with a ROG phone. The Game Genie app that comes with the ROG Phone 3 and 5 allows you to map keybinds to the controller. This process was intuitive, however, it did take some getting used to. I was able to map the controls for PUBG Mobile, onto my controller so I didn’t have to touch my screen at all. Not only did it make me play better, but it made the experience more enjoyable.

The Kunai 3 Gamepad is a gaming controller for harcore phone gamers, with a ROG phone. It’s a responsive, well-designed piece of gaming equipment that does what it intended to do, make phone gaming more accessible and fun.

The problem is it’s a hassle to use. If you’re only going to be playing games for a short period, it can become a nuisance. Taking the protective case off and putting the controller case on, repeatedly, gets annoying quickly.

It’s Bluetooth wireless mode is compatible with other devices, but you’ll struggle to get much use out of it if. For this to be worth your money, you need to have a ROG phone.

The Kunai 3 Gamepad will only appeal to those with a ROG Phone. And even then, you’ll have to ask yourself: can you tolerate replacing the Kunai 3 case on your ROG Phone several times a day, if it makes gaming more enjoyable? For me the answer is no. While the Kunai 3 Gamepad is functional and comfortable, it was just too tedious to use daily.