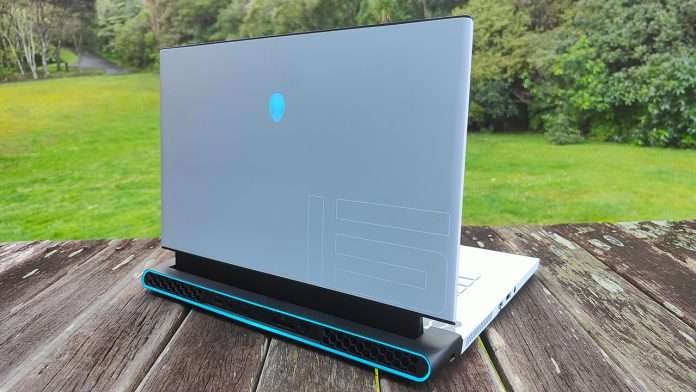 Alienware’s M15 R4 is a laptop designed for gaming, and it doesn’t disappoint.

Its GeForce RTX 3080 graphics card, combined with its Intel i7-10870H processor make this a laptop that can handle anything you throw at it, whether it be the most graphically demanding games or high-resolution video editing.

This is an expensive device and some may be put off by the lack of a 4K display however, if you’re looking for maximum frames per second while gaming, or want a laptop that can handle heavy workloads like video editing, the M15 R4 is one of the best on the market.

You can also customise the hard drives in the M15 R4. However, this will cost extra. An additional 2TB SSD hard drive costs $580, which adds to the already high price.

The M15 R4 looks great. It’s unique, but it’s not loud enough to make people think, “look who brought their gaming laptop to the office.” It’s a nice balance.

At first glance, its cream and black colour scheme looks like technology from the eighties, but I appreciated the little details Alienware has incorporated.

The hexagonal vents look great, the RGB keyboard lit up against the cream frame stands out, and the alien head-shaped power button that changes colour all add up to create a laptop that looks different from the familiar design we see in other laptops. It looks cool.

It’s also spread out well. There’s a good amount of space below and beside the keyboard, which was great for resting my palms and sides of my hands, ideal for gaming. The keyboard is also wide enough, so it doesn’t feel cramped when typing. The spacing is very well done.

The keyboard itself is a membrane-based keyboard that’s nice to type with. It has a good bounce to it. While it doesn’t have the feedback spring of a mechanical keyboard I had no issues with it. I also didn’t struggle with key rollover. While playing games, the keyboard registered all of my keypresses without issue.

The trackpad is one of the best I’ve used on a laptop. It’s accurate, responsive, and most importantly, it’s very good at detecting accidental touches. I could game with my palm resting on the trackpad, and I never had any issues with it being picked up as a mouse input, interrupting my gaming.

The laptop has a number of ports, 2x USB-A ports and a micro-SD slot on its right side. Another USB-A port, an ethernet port and a 3.5mm audio jack on the left. And on the back, there’s a power port, a mini-display port, an HDMI port, an Alienware graphics amplifier port (that allows you to connect an external desktop graphics card) and a USB-C with Thunderbolt 3 port.

Everything you need is here. However, I would’ve liked more USB-C ports. More and more devices are using USB-C, and it feels like the M15 R4 hasn’t prepared itself for that.

If you’re looking to get the maximum frames when gaming, this configuration is ideal. You won’t have the graphical fidelity of a 4K screen, but you’ll achieve a much higher FPS.

A 2K screen would’ve been nice. The M15 R4 is easily powerful enough to achieve high frame rates at 2K resolution. But the screen works well. It’s bright and has great colour accuracy.

With the combination of the Nvidia RTX 3080 graphics card and the Intel Core i7-10870H processor, not much needs to be said about the M15 R4, other than it flies.

This is a laptop designed with performance in mind, and it doesn’t disappoint.

The M15 R4 will handle any game you throw at it at the highest graphics settings, with ease.

These frames held steady as well. I didn’t notice any sudden drops in performance. I didn’t come across any CPU or GPU bottlenecks due to the i7-10870H not keeping up with the RTX 3080 or vice versa. The graphics card and processor complement each other well.

Based on my Cinebench stress tests, Intel’s i7-10870H achieved very good scores. It achieved a 9908 multi-core score and a 1071 single-core score. It can keep up with anything you’ll want to do with this laptop, whether gaming or video editing.

Impressively, the M15 R4 succeeds where a lot of other gaming laptops struggle. I was able to achieve high frame rates without needing to plug the laptop in. Other gaming laptops only get the best out of their components when connected to an ample power supply. This isn’t the case with the M15 R4, and it’s great for gaming while away from a powerpoint. However unfortunately the battery life doesn’t offer the same impressive performance. (More on that below)

Two caveats come with a laptop this powerful. It’s loud. The M15 R4 makes a lot of fan noise. It’s one of the loudest fans I’ve heard on a laptop. With that said I’d much rather have a loud fan than overheating components which is ironic because the M15 R4 also gets really hot. When resting the laptop on my legs, it got uncomfortable after a while, and I had to place it on a table.

The built-in speakers are about as good as you’d expect. They produce a tinny sound with next to no bass. They’re there more for watching YouTube videos as opposed to gaming, and 95% of the time I was using headphones, so the fan noise wasn’t a major issue.

Disappointingly, the battery is an area where the M15 R4 struggles.

Even with the battery set to “best battery” mode, I could only achieve around 3 hours of life, and this was when the laptop was idling, I wasn’t playing games. The laptop was merely turned on.

For a laptop that has a graphics card and processor as powerful as these, this short amount of battery life is to be expected. However, performing any tasks will drop the battery life significantly.

While gaming, the battery life fell to just 1.5 hours. It severely hamstrings the M15 R4’s ability to be used on the go.

If you’re looking for a gaming laptop that can run the best games at maximum frames, then the M15 R4 is one of the best on the market. Just prepare to pay a lot.

It’s a powerful laptop that can easily handle anything you throw at it. Whether you’re looking for a laptop that can run the latest games at their highest graphics or you’re editing videos, the M15 R4 will not let you down.

For gaming, the M15 R4 sacrifices resolution for frames. Its 1920 x 1080 resolution and 300Hz refresh rate display will allow you to achieve maximum FPS, and it’s great, especially for twitch-based games like first-person shooters.

Yes, it’s fans are loud, and it gets hot, but these small issues are quickly forgotten when you see how well it performs.

With that said, the M15 R4 is still plagued by the same battery issues most gaming laptops come across. The poor battery makes it difficult to use the laptop as a portable device. If you’re planning on using the laptop on the go, you’ll need to plan ahead to make sure there’s a powerpoint you can use.