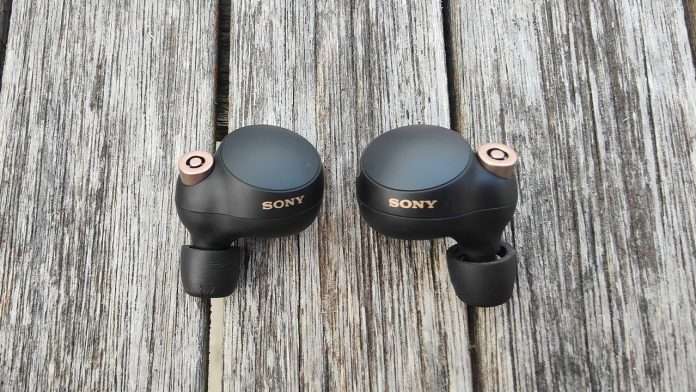 Sony has focused on what matters most with their WF-1000XM4 Truly Wireless Headphones. Noise cancellation, audio quality and battery life. And in doing so, they’ve set a new standard for all categories. The WF-1000XM4s are fantastic.

The active noise cancellation is comparable to over-ear headphones. The audio quality is outstanding. The battery lasts literally for days, and Sony has finally caught up with the competition and made the WF-1000XM4s water and sweat resistant.

Currently, Sony’s main competition, the Apple AirPods Pro, cost $450, and the Bose QuietComfort Earbuds cost $440. This makes them reasonably priced in the market.

Sony has opted for a complete design change with the WF-1000XM4s. The latest earbuds feature a matte design with a more rounded shape. No more Frankenstein-y bolts hanging out your ear.

They’re small earbuds that twist into the ear and initially feel uncomfortable. But after a short period, I found the earbuds were some of the most comfortable I’ve used.

This can be put down to the new “Noise Isolation Earbud Tips.” You don’t get any silicone buds with the WF-1000XM4s. Instead, they come with memory foam buds that are brilliant.

The buds only come in three sizes, large, medium, and small (a lot less than the eight buds included with the WF-1000XM3s); however, the memory foam adapted to the shape of my ear. They became more comfortable the more I used them. The fit was snug by design, and I found Sony’s claims that this would improve noise-isolation over rubber buds, to be true.

The WF-1000XM4s aren’t flashy. The only thing that stands out is the rose gold circular microphone underneath. They’re sleek and inconspicuous, featuring an all-black colour scheme. The charging case has the same colour profile, and it works well. You can also get them in white with rose gold tint. This, too, looks sleek.

The charging case has been significantly downsized from its predecessor. It’s now 40% smaller. It has a USB-C port for charging and is compatible with wireless charging. Its magnetic latches that connect with the earbuds are firm and work well, and the LED on the front that signals charging required, power on or pairing, works exactly as it should.

I would’ve appreciated the lid being stronger, it’s flimsy and weak, and I was worried about it opening without me knowing, but the strength of the magnetic latches alleviated these fears. Even with the lid open, the earbuds wouldn’t fall out.

It’s also great to see Sony has finally caught up with its competitors and made the WF-1000XM4s water and sweat-resistant. While there are other earbuds out there with better resistance ratings, you can comfortably run with these earbuds or get them wet in light rain.

The sound quality is where the WF-1000XM4s truly shine.

An area where earbuds are known to struggle is low frequencies. The XM4s don’t have these struggles. Listening to bass-heavy tracks like Meditjin by Baker Boy, the bass wasn’t overpowering, it didn’t distort the mix, and it came through refined while still pumping.

That’s not to say the earbuds favour low-frequency sounds. Listening to more melodic tracks like Yippie Ki Yay by Dan & Drum, I could clearly hear every sound in the mix. It doesn’t matter what genre you’re listening to, the XM4s work well with it all.

I was blown away by the audio quality of the WF-1000XM4s. It’s cruel to compare them to other earbuds. They’re more comparable to over-ear headphones, and good ones at that.

The XM4s support Hi-Res audio, via Sony’s LDAC codec. Whether you believe this impacts the sound quality is up to you. However, it’s nice that the option is there. iPhones don’t support LDAC, and I found the audio still sounded fantastic, so it really comes down to personal preference.

The audio quality is only made better by the Sony Connect App. I still find this is the best headphone dedicated app on the market. It allows you to adjust the sounds exactly to your tastes using an in-built equaliser. Some other earbuds and headphones have this feature. However, you often don’t hear a change in the sound. This couldn’t be further from the truth with Sony’s app. The default sound lacked bass for my tastes, and this was easily remedied by turning on the Bass Boost sound profile, or pushing the low frequencies up manually. It’s brilliant, and the WF-1000XM4s easily accommodated the changes.

The WF-1000XM4s support 360 surround sound audio, however, you have to be using a streaming service that supports it. At the moment, those are Tidal, Deezer and Nugs.net.

It’s quite a way off Apple’s 360 Surround Sound capabilities. The worst part about it is the setup. You have to take pictures of each ear and send them to Sony to analyse your ear, which is just weird. Also, this doesn’t work for movies or TV. It’s not worth the hassle. The earbuds sound great without it.

With these earbuds, Sony has set the industry standard for active noise cancellation. The ANC is incredible.

Paired with dual sensor microphones on each earbud (one feed-forward and one feed-back) ambient noise is heard, analysed, and cancelled out. The results are astounding. I couldn’t hear what someone standing 1m away from me was saying, with my volume at only 45%.

I like to test noise cancellation playing the drums. While the ANC on the WF-1000XM4s wasn’t quite as good as over-ear headphones, they easily had some of the best results for earbuds. I barely heard the low frequencies of the bass drum and struggled to hear the hi-hat at all.

Sony’s Speak-to-Chat feature is here. If the earbuds hear you talking, they let in ambient noise so you can listen to the person you’re talking to. I didn’t have much use for this feature as I think talking to someone with your earbuds in is rude, and more often than not, I like to sing along to my music. Fortunately, you can turn this feature off in the Sony Connect App.

The touch controls work as they should. You can skip songs, pause playback and take calls by touching the left or right earbud. They’re responsive, and the round shape makes it easy to input the correct commands. I especially appreciated being able to customise what certain touch controls did. I didn’t have much use for turning on ambient sound mode, so I changed the input to volume control. It’s seamless and easy to do, and it allows you to customise the WF-1000XM4s to do exactly what you want them to.

The ambient sound mode worked as expected. The microphones pick up outside noise and play it into your ears. It sounded natural and less robotic than the WF-1000XM3s. It works well.

The microphone also works well. Talking to a colleague, we could both hear each other clearly. I tested the Automatic Wind Noise Reduction by standing directly beside a fan. My colleague couldn’t hear any wind disturbance, it’s great.

The battery is another area where Sony now leads the market.

The WF-1000XM4s boast an impressive 8-hours of continuous play with ANC on. To put this in perspective, the Apple AirPods Pro and the Bose QuietComfort Earbuds last 5 hours, respectively. With noise cancellation turned off, the earbuds last 12 hours.

Also, the case charges the earbuds twice, so you’re looking at 24 hours of continuous play with noise cancellation on or 36 hours with it off. It blows the competition out of the water.

Sony’s WF-1000XM4’s are fantastic. They have set the new standard for what matters most in a pair of premium earbuds.

The audio quality is incredible, the ANC is brilliant, the battery is massive and they come with all the features you would ever need in a pair earbuds.

In short, they’re the best earbuds on the market and you’re going to love them. And they’re worth the money.