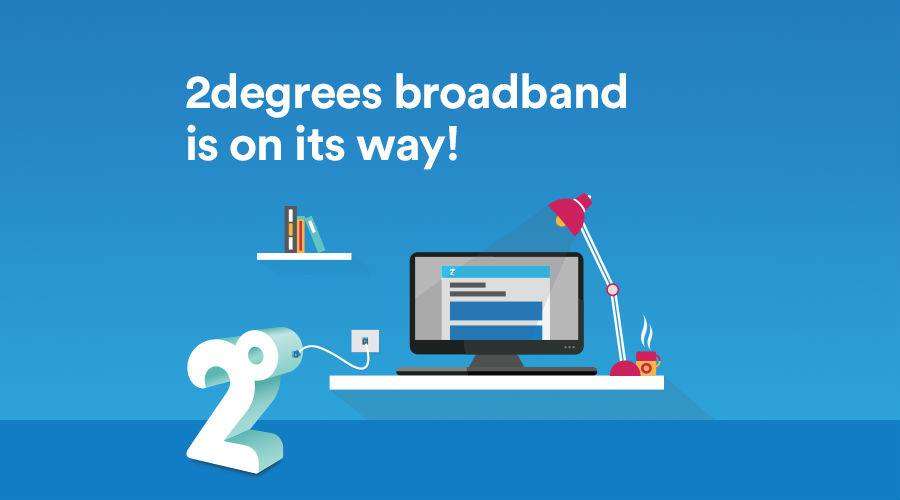 I’ve been a customer of 2degree broadband for the past 13 months. During that time, I’ve been connected to both the VDSL and Fibre network. Here’s my 2degrees broadband review.

The first thing you need to know about 2degrees broadband is that it runs on New Zealand’s national broadband network (managed by Chorus). 2degrees isn’t responsible for any of the physical properties of your internet connection (the connection from your house to the broadband network). The main role of 2degrees, and every other NZ broadband provider, is to bill you for using Chorus’ network.

In theory, this means the speed and reliability of your 2degrees broadband connection should be the same as any other New Zealand ISP (internet service provider). In reality, it’s not as simple as that.

ISPs manage their customers’ connections in different ways. The router your ISP loans (or gifts) you will have a big impact on your broadband connection, for example (more on this below). ISPs also have the power to throttle their customer’s connection if they deem the connection to breach its “fair use” terms and conditions.

The good news here is that, from my experience, 2degrees’s isn’t guilty of heavy-handiness when regarding throttling its users’ connections. In fact, I’ve found 2degree’s broadband connection to be really quick.

I’m a heavy internet user (my record is 850GB in a month!). I work from home and consume all my TV over the internet, and also suffer a semi-serious addiction to playing Fifa online.

And, most of the time, my 2degrees broadband connection has performed well.

My line-of-sight wireless speed tests regularly return speeds above 90% of my advertised connection speed – from both my copper and fibre connections.

The main problem with 2degrees broadband is the router that it loans its customers.

I was given the FRITZ!Box 7560 router. On average, my house has between 10-15 devices connected to the wifi at once – with fewer than five of these devices actively using the internet at any one time.

Despite this relative light load on the FRITZ!Box 7560 that 2degrees provided, I found myself having to restart the router several times a week when I was on the VDSL network.

The problem improved when I switched to a fibre connection – as the Chorus engineer who dug up my driveway said it would, due to the improved reliability of the network – however, having to restart a router a few times per month still isn’t a “good” experience in my books.

Which provides a good segway into 2degrees’ customer support, as I contacted them several times to try to solve the problem.

Each time – after waiting less than five minutes on hold – the engineer would try to force me to connect my laptop to my router via an ethernet cable and email a screenshot of the results to their support email address. The reply was always the same: telling me that everything looked fine from their end.

After persisting and protesting that one-off speeds weren’t the issue. The “fix” the 2degrees support team offered each time was also the same. They’d change the router’s Wireless Channel and tell me it was now set to automatically scan and switch to a Wireless Channel that was the least crowded in future.

Unfortunately, this is to be expected with a free router that comes bundled with a broadband connection. Why? The reason is simple, the cheaper the router, the more profit for the ISP.

If you have your own high-end router, or you’re willing to invest in one, then these connectivity dropouts will disappear.

2degrees has correctly identified that it’s hard to create a point of difference in terms of broadband service in New Zealand (as Chorus’s excellent UFB nationwide network is available to all ISPs).

One technique ISP’s use to attract new customers is the perks they offer you by choosing them as a supplier. 2degrees has three main promotions here:

The first is a straightforward discount of $10 if you’re a mobile customer with them.

Next is the free loan of the FRITZ!Box 7560 router (though you may have to return this via free post at the end of your contract).

The finally perk is a free subscription to Amazon Prime Video for a year worth $9/month ($108/year).

How good is 2degrees broadband?

2degrees has been voted as one of the top five best ISPs in New Zealand in terms of: Overall Satisfaction, Bill Clarity, Clarity of Contract Terms, Customer Service, Flexibility of Contract, Network Performance and Value for Money according to data from Canstar Blue.

How do I set up my 2 degrees modem?

Setting up your 2degrees router should be as simple as plug-and-go. You can find your wifi network details printed on a sticker located on the base of your router. If you’re having trouble connecting to your router, you should get in touch with 2degree’s Help and Support team where you can Live Chat or speak to a support agent via a free phone number.

How much does 2degress broadband cost?

2degrees is a solid choice of ISP here in New Zealand. As I’ve mentioned above, the internet connection you get with 2degrees is no different in terms of speed or reliability compared to any other internet provider here in New Zealand. The only points of difference are your billing interface (which is fine here), the level of customer service you receive (also fine) and the perks you get for signing up with 2degrees as your ISP (see directly above).