The Viavita Sumi is a good option for people who aren’t looking to spend too much on a domestic rower but still want a good rowing workout at home. Here’s our full Viavito Sumi Folding Rowing Machine review. See also: best home rowing machine 2017.

This rowing machines uses a combination of a 7kg flywheel and high-powered magnetics to create 10-levels of resistance. This gives it an action that is really smooth while remaining quieter than a lot of high-end rowing machine. Users who keep a steady pace will be happy with the feel of the Viavito Sumi.

It’s not quite up to the standards of the Concept2 Model D or WaterRower Natural Rowing Machine when it comes to creating the same feel as an oar through water. Harder strokes will not be met with increased resistance in the same way the model’s mentioned above (or rowing on actual water) will, for example.

The 10-levels of resistance goes some way to making up for this. Allowing rowers of all abilities to find a intensity that’s suitable for them. The resistance level is controlled by an oversized wheel located underneath the monitor. 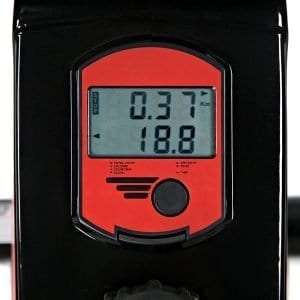 The LCD monitor is raw. It displays everything you need from a rowing machine and nothing more. The small monochrome screen lets you cycle through your workout’s time, distance, speed, stroke count and strokes per minute.

It’s a comfortable machine to use. The seat is ergonomically designed to match the contours of a user. The seat rests on 4 rollers that create a smooth and sturdy action. Its foot pedals are large and slightly pivot, allowing push off and recoil at natural angles.

[amazon_link asins=’B0153NKCZG’ template=’ProductAd’ store=’techt06-21′ marketplace=’UK’ link_id=’951a7b96-d96e-11e7-a14e-f74c799b6b61′]The bulk of the Viavito Sumi Folding Rowing Machine is made up from tubular steel. This keeps the unit lightweight, weighing only 26kgs, and easy to move around. The machine includes built-in rollers and is foldable too, making it easy to store when not in use.

The Viavito Sumi comes largely preassembled. Building the final part is easy and should take around 30 minutes to complete. All users need to do is insert a few bolts using the tools included in the box.

This machine is great a delivering the basics of a home rowing machine. It’s easy to assemble and its 10-levels of resistance are enough to put rowers of all levels through their paces. It’s comfortable to use and easy to store too. A good choice for those looking to spend less than £200 on a home rowing machine.

See also: Concept 2 vs WaterRower: We pitch the Model D against the Natural Rowing Machine.