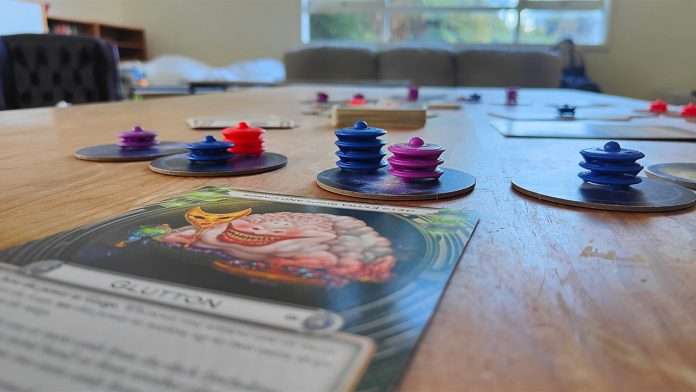 Cosmic Encounter is a space-faring, 3-5 player game where you’ll form alliances, bluff others, invade enemy territories, and defend your home system as you race to colonise five enemy planets.

As a randomly chosen alien race, you’ll have to strategise as best you can to take over the universe, while also trying to stop other players from winning the colonisation battle.

Cosmic Encounter has a simple set of rules, a lot of player interaction and enough randomisation to ensure no two playthroughs are the same. Promising a lot of enjoyment out of the game for years to come.

A game can take anywhere between 1-2 hours.

In Cosmic Encounter, players are given two randomly-selected alien races of which they choose one (there are 50 in the base game). These alien races have different abilities and play styles that dictate how you’ll approach the game.

The game revolves around a simple 1v1 battle mechanic that’s easy to understand. The tricky part is being able to make strategic decisions that work well with your power.

The goal is to be the first to colonise five planets (there can be more than one winner.) You’ll have to decide if you want to play peacefully, be a shrewd negotiator, or a dominant bully. And if you’re going to win, you’ll have to strategise well.

At first glance, Cosmic Encounter looks like a complicated game. And while it’s more complex than Monopoly (or Cluedo, or whatever), it isn’t overly difficult to pick up and play.

The core rules of the game are simple and easy to follow. A turn is broken down into phases which are conveniently shown on your alien sheet (that sits in front of you.) You always know what comes next.

The complexity comes when alien powers are brought into the game. These are intentionally designed to break specific rules, and sometimes, there can be confusion as to what they allow you to do. In my household, there have been many debates about what an alien power is capable of. However, they’re written in enough detail so you can easily figure out what they allow. With this in mind, the 14+ age recommendation on the box is a wise one.

There are handy tools that are great when trying to learn the game. Each alien is colour coded based on skill level. Green is beginner, yellow intermediate, and red expert. This system, as you’ll discover, is very helpful – though, I recommend playing at least a couple of games using only green races to get the hang of the rules.

One of the best parts about Cosmic Encounter is its player interaction. In this game, players take turns; however, everyone is always involved. Skirmishes take place between two players; though all other players have a part to play. If asked, you can ally with an attacking or defending player during these battles, and you can contribute to turn the tide in your alliance’s favour. It’s a neat feature of the game that keeps everyone involved, it makes things more interesting. There are also cards you can play at any time during the playthrough to affect enemy plans. It’s a board game where you’re constantly engaged, and it’s a lot of fun.

Players can also bluff, and good moves aren’t always the ones where you win the battle. For a strategy game, being able to outwit your opponents is crucial, and there’s a lot of potential for this in Cosmic Encounter.

The player interaction is made all the more enjoyable by the vast amounts of randomisation in the game. These chance occurrences, can dramatically change the course of the playthrough and you’ll consistently need to adapt accordingly.

It begins at the start when players pick their alien races. There are 50 alien sheets to choose from, all with different powers and playstyles. No two games of Cosmic Encounter are ever the same. These alien powers are significant game-changers, and you’ll need to use them wisely if you want to win.

Similarly, if you aren’t dealt a powerful hand of cards, you’ll need to strategise accordingly (fortunately, there are ways to get a new hand). You also never know who you’re Encounter will be with. A randomised card flip determines this.

All of this randomisation means you’re constantly changing and reevaluating your strategy, and it’s engrossing. Pulling off a smart complex move or winning a crucial battle is incredibly rewarding, and the game never gets boring.

There are also two specialised card types that you can be dealt. Artifact cards allow players to alter the outcomes of encounters and the game. And flare cards are race-specific abilities that can dramatically change the way you play. If a player gets their own flare card, they unlock a powerful ability that could give them the edge. These cards add another level of randomisation, and nothing feels better than foiling someone’s plan with an artifact card or a flare.

Cosmic Encounter is fun, it’s original, and every time you play, it feels different. I’ve never played a board game where an ability tells you you can steal cards from the deck so long as you don’t get caught.

The game revolves around player interaction, and everyone is constantly involved. The core rules are easy to pick up, and there are tools to make the game easy to follow so anyone can play.

Making strategic decisions and pulling them off is always rewarding and the constant randomisation and changing of scenarios keep you on your toes. You’ll have to adapt regularly to win.

This is one of my favourite board games, and it’s a great amount of fun. You’ll want to play over and over again.