Shopping for American candy in the UK can hit your wallet hard, especially if you’re looking to buy in bulk. We’ve flicked through pages and pages of deals over on Amazon to spotlight the best cheap candy selection boxes.

The selection boxes in our top 5 include a mixture of popular candies and chocolate bars. You’ll find everything from Chewy Lemonheads and Swedish Fish to chocolaty Milk Duds and Butterfingers.

So whether you’re an expat looking for a taste of home or a curious Brit with a sweet tooth, keep scrolling to see the best American candy selection boxes on Amazon. Just don’t tell your dentist.

Where can I buy American candy in the UK?

If you’re based in the UK, you have a couple of options. Some big-name supermarket chains sell tasty American snacks. Morrisons, for example, has a ‘World Foods’ section where you’ll find some tempting treats – Milk Duds, Reeses Puffs cereal and Twinkies.

There are some smaller shops on the high street that might be able to help, such as American Fizz and American Candy. These shops aren’t exactly common, though, so you might struggle to find one nearby.

Your best bet is to shop online. We’ve spotted plenty of collection boxes on Amazon that’ll satisfy your cravings and give you a taste of the states. Most of the popular picks are delightfully affordable, too.

How much does American candy in the UK cost?

If you’re in a major city you might spot an American-themed shop selling some goodies. But be warned that prices can be absurdly high, especially in London. It’s not fun at all paying £10 for a box of American cereal.

Prices for American candy in the UK can be absurdly high in-store. Try one of our recommended selection boxes instead.

The selection boxes we’ve rounded up below start under £10. You have loads of choices depending on what your go-to candy is. The best Amazon sellers offer you a choice between ‘candy boxes’ and ‘chocolate boxes’. You’ll also find loads of different cereal flavours online. 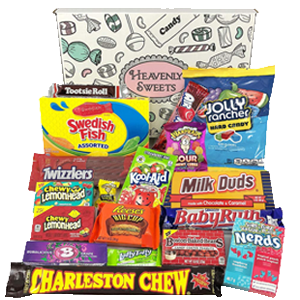 This popular candy hamper on Amazon consists of 18 different items. Pop open the box and you’ll have your choice of Swedish Fish, Jolly Ranchers, Twizzlers, Milk Duds and other American favourites.

The seller, Heavenly Sweets, says this collection box is perfect for peanut butter lovers. It arrives in a Heavenly Sweets branded box which has been imported directly from America.

If the seller runs out of stock for one of the normal ingredients, it’ll be swapped out for something similar and just as scrumptious.

This selection box could be a great gift for the American/s in your life. Keep it bookmarked for a future birthday or 4th of July celebration.

You’ll get some bars of Hershey’s chocolate chucked in this one, along with bite-sized Milk Duds and mini Reese’s Pieces. Your food arrives neatly packaged in a branded Heavenly Sweets box, which gives it a nice retro feel.

As is the case with the selection box above, the seller will swap out food that’s out of stock. But whatever is in stock, you’re still guaranteed 18 different candies. 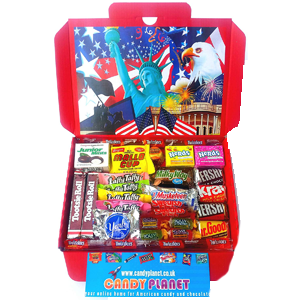 This American candy box comes courtesy of Candy Planet on Amazon. It’s slightly smaller than the two alternatives above and the price reflects that. For around a tenner, you’ll get 26 imported sweets.

We really like the branded box, which has an oh-so-American theme featuring the Statue of Liberty, the US flag, the White House and an eagle (of course).

According to Candy Planet, “nobody else in the UK has all of these rare miniature American chocolates and glossy red hamper boxes”. If you’re looking for a unique, American-themed gift, this should fit nicely. 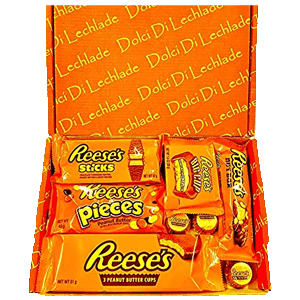 If it’s Reese’s chocolate you’re after, then look no further than this Reese’s American sweets box.

For under £10, you get 8 different bars of choccie in a classy orange box branded with the Dolci Di Lechlade logo.

This seller specialises in themed candy boxes. Take a trip over to their seller page on Amazon and you’ll find other boxes based on Australian sweets, sour American candy and Cinnamon-flavoured American candy. 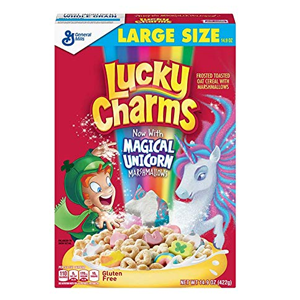 This large box of General Mills Lucky Charms cereal is up for grabs at around £6. The best-selling cereal first came about in 1964 and it has been an American favourite ever since.

Read next: The 5 BEST Cheap Products to Reduce Back Pain